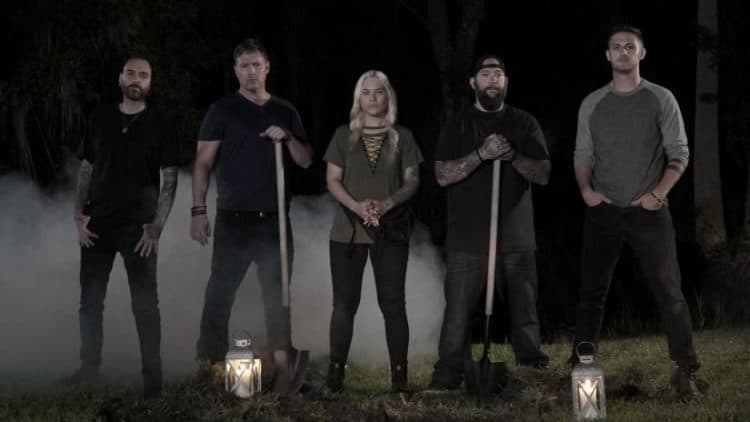 There is a brand new series coming to the Travel Channel and it’s called “Ghost Loop.” It joins the channel’s lineup of paranormal television series but adds a new dimension that has not yet been covered on a regular series. If you’re a fan of paranormal news and information then this is a new show that you will want to check out when it airs. To give you an idea of what to expect from the show, here are 10 things that you didn’t know about Travel’s “Ghost Loop.”

This brand new television series first aired on Friday, December 27, 2019. The title of the first episode is “Alarmed and Dangerous.” If you missed out on the first episode you can still get caught up by streaming it through the Travel Channel website.

2. It’s based on a paranormal phenomenon

The show “Ghost Loop” investigates what happens when paranormal entities make their presence known to human beings. These entities bring terror and fear to many and it is explained that the spirits repeat repetitive supernatural cycles that are repetitive in nature, and believed to be endless. They manifest over and over again and the events take place in the same location, resulting in what is commonly referred to as a haunting. The recurring cycle is called a Ghost Loop, hence, the title of the television series.

3. It details a specific kind of haunting

There are different types of hauntings in the realm of the paranormal. The distinctions between the various types have been identified by paranormal researchers and experts on the topic. This series features experts who specialize in “Ghost Loop” hauntings and they turn their focus towards the investigation of these types of events. The goal of the experts on the show is to bring assistance to help those who are still living and having nightmarish experiences with these hauntings, as well as to help the dead who are repeating the same cycle over and over again.

4. It shows us that there is hope for spirits caught in this cycle

We learned that the team of paranormal experts who appear on “Ghost Loop” are conducting their work with a very specific purpose. From what we know at this point, they can offer hope for spirits that are stuck in a cycle of repetition, offering hope that the cycle can be broken, and the spirits can go to the places that they were intended to be. This also brings relief for the people who either live in haunted homes or work in businesses that are affected by these recurring manifestations. The show offers hope for both the living and dead who seem destined to be forever plagued by paranormal re-enactments of tragedies and other events.

“Ghost Loop” is a show that will provide a full hour’s worth of information and entertainment for viewers. Each episode is packed with new revelations as it follows the team on their investigations and encounters with paranormal entities. The team consists of a paranormal investigator who is also a medium named Sean Austin. He is joined by Kris Star, an empath who can intuitively feel the emotions of the spirits of both the living and the dead. Chris Califf is a researcher and a technical advisor on the team. Eric Vitale is a design specialist, adn finally, Matt Lytle is a technical support specialist.

6. The episodes will offer diverse experiences

Be prepared for some good variety in the locations and the stories that are revealed behind them. There is a reason that human beings are so intrigued by history. Most of us seem to instinctually know that in some way, we are all tied to the past, but don’t really know why this is. “Ghost Loop” investigators look into the history of each location with a complete fact-finding mission to first learn about the people and events tied to the history of the locations as they search for possible answers for the paranormal activities taking place. They take on a variety of different cases that will range from the 19th century to the present, so some of the hauntings have been going on in certain locations for hundreds of years. There will be diversity in the stories and the locations for each episode.

7. The team are strategists

A great deal of research, analysis, and discussion go into each case that the team takes on. After facts are compiled, everyone gets to work to formulate a strategy for recreating a trigger scenario to lure the spirits in. One of their goals is to create an emotionally charged setting that is intended to engage the spirit so the energy can be released and everyone who is being affected will feel a release and find peace from the process. The team even reconstructs rooms or settings to the way that they believe it looked at the time that the trapped spirit encountered separation from their mortal bodies.

8. Parts of the show will be scary

This is a television series that will recreate some disturbing events. The recreations are based upon actual events that have taken place under very traumatic circumstances. If you are squeamish about this, you may want to be prepared in advance, or watch the show with someone else in the room.

9. The investigators are adversely affected by the entities

Expect to see some graphic results from the team of experts’ interactions with the paranormal entities that they encounter. We learned that in the premiere episode, several of the team members were physically impacted during the process of investigation and resolution. The spirits affect the moods of the team causing anger and conflict, one experiences a burning sensation over his entire body, and another gets physically sick from the influence.

10. There is a full season line up

We looked ahead to see how long the show is going to last and if there are many episodes taped yet. To our delight, we discovered that there are several episodes yet to be shown. If you’re a fan of paranormal shows then January will be a particularly entertaining month for you.