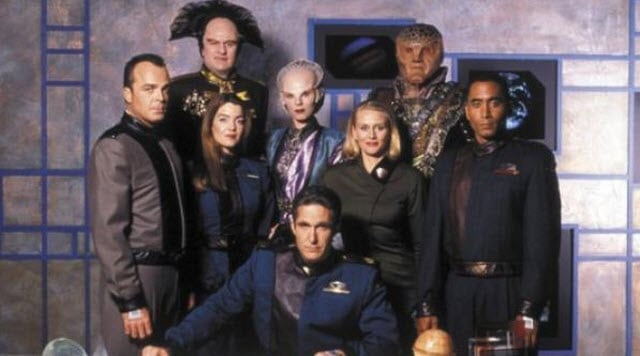 I loved the show Babylon 5. I never watched it while it was on air, but received a DVD set several years later as a birthday present, and was hooked from the moment I put in the first DVD. I loved the humor, the drama, and the politics and religion of the show. From the very first season, it was clear that the show had been designed as a part of a single great story arc, with nearly everything incorporated into that arc as either a piece of important character development or as a direct advancement of the plot. Nothing was wasted, and that is something I have yet to see any other show, even my other modern favorites (Game of Thrones, House of Cards, Supernatural), do.

Babylon 5 is also the reason that I could never watch Star Trek TV shows. The continuous filler episodes and lack of a clear, driving story arc always drove me mad. I couldn’t believe that we were just visiting a planet, then leaving, almost never to return.

The acting of Babylon 5 was good (not spectacular, but solid all around). But the writing was some of the best I’ve ever seen. While others might find it corny or didactic, I always found it moving, funny, and just plain great. J. Michael Straczynski is, in my opinion, a wonderful writer, just as good as the much more popular and very different in style Joss Whedon. He was showrunner, executive producer, and wrote 92 of 110 episodes, exercising almost total control over the show. It was his vision all the way through, and that is also something I find missing in other, lesser television shows. Many are run by committee, and even the best committee lacks the creative vision and drive that a single creator can provide. All told, Babylon 5 was one of the shows that helped define my later teenage years and made me fall in love with television and science fiction.