Home
Movies
Trolls Is the Most Surprisingly Good Movie of 2016 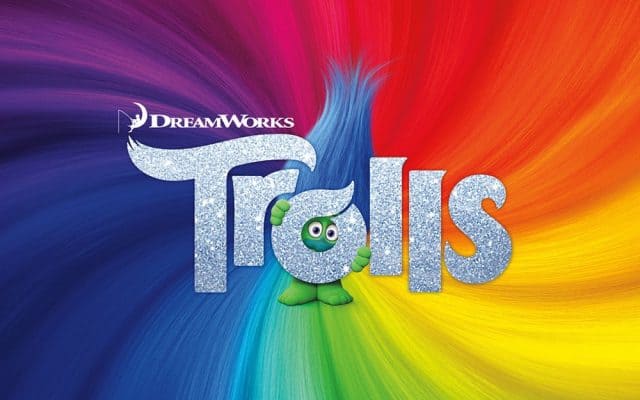 Along with innumerable other moviegoers, I found myself waddling into my local movie theater on Black Friday looking for something to watch.Â  Flanked by family, it’s often difficult to find a movie that everybody wants to watch, or at least that everybody’s willing to put up with for two hours.Â  And having already seen Doctor Strange, Moana, Arrival and Fantastic Beasts and Where to Find Them, viable options were in short supply.

That’s how I found myself sitting down to watch Trolls: an animated musical about the 90’s toy line that I had promised myself at the beginning of the year that I would never subject myself to.Â  Although DreamWorks is a respectable animation studio, and Justin Timberlake and Anna Kendrick are fine actors, I had learned my lesson from watching Angry Birds: children toys don’t make good movies.Â  Not even Transformers or G.I. Joe could respectably make the leap to the big screen, and those at least had highly successful TV series to draw from.Â  Trolls didn’t even have that much going for it.

Which is why that I am still in shock that they managed to pull it off.Â  From an apparently bankrupt well of creativity, DreamWorks has managed to produce one of the most memorable and affecting animated films of a year stuffed to the gills with memorable and affecting animated films.Â  Despite what you might think from the premise and previews, Trolls is a genuinely good film of surprising narrative depth.

That’s not to say that it’s on Zootopia‘s, Kubo‘s or Moana‘s level.Â  Very few things are.Â  But given the opportunity to, I would much rather sit through Trolls a second time than Kung Fu Panda 3 or even Finding Dory.Â  Its unique sugar-pop aesthetic, endlessly catchy musical numbers and, yes, moving interpersonal drama gets as endlessly stuck in your head as the latest hit song on the radio.

The problem that I always found with Jukebox Musicals — movies like Moulin Rouge! that repackage hit songs into original stories — is that they’re just glorified music videos.Â  Sure, the lyrics might match up reasonably well and the songs might move things along, but the movie itself never seems to escape the crushing realization that the rest of the film — the “talkie” bits between show-stopping musical numbers — is never worth watching on its own.Â  It’s just utilitarian fluff between chart-topping hits that you could just as easily listen to on the radio for free.

Trolls avoids this genre pitfall by making the movie itself about the songs.Â  The Trolls aren’t just singing modern pop music for our benefit, it’s the cornerstone of their happy-go-lucky civilization.Â  It’s a deep-rooted need in their collective psyche.Â  It’s how they relate to and interact with one another.

And Branch — a gray-toned Troll who refuses to sing, dance or participate in hourly hug times — is the audience surrogate: the guy who simply doesn’t “get” it.Â  When the other Trolls prepare for a rave to celebrate the anniversary of escaping from the Bergens — the monstrous giants who eat Trolls to simulate the sensation of happiness — Branch calls out the idiocy of the plan.Â  And when they never-the-less go through with it — giving Â away the secret location of their hidden village in the process — he and the relentlessly upbeat Troll princess Poppy have to mount a rescue mission to save their people from extinction.

If Trolls bought entirely into its own premise — that happiness is life’s highest aspiration — Branch’s story arc would have been resolved by him realizing the error of his ways, giving into the rhythm and becoming just like every other Troll in the movie.Â  And while he does eventually get jiggy with it and join the rest of Troll society, it’s just as much about the other Trolls learning that there is more to life than just cupcakes and rainbows: that sometimes bad things happen and you just have to move on. 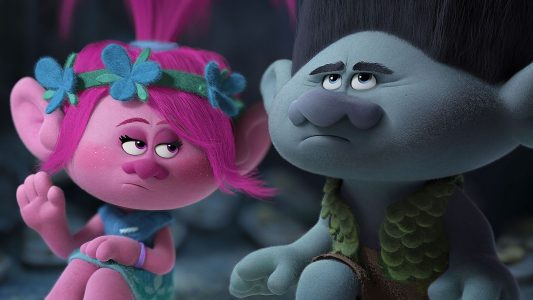 Consider the movie’s climax.Â  The entire Troll village is captured and about to be eaten.Â  Â In a fit of soul-crushing depression, Poppy falls to her knees: her day-glow pink complexion draining to gray.Â  Upon seeing her defeat, the entire Troll population follows suit and their prison becomes consumed by darkness.

But a single voice calls out from the black, singing a downbeat rendition of Cyndi Lauper’s “True Colors.”Â  The Trolls look around for the source of the music and Branch steps out from the crowd, slowly approaching Poppy as he continues to sing.Â  His song slowly moves her to smile, and then to dramatically fill again with her trademark color.Â  After confessing that he loves her, they touch hands and color that we’ve never seen from him spreads throughout his body.Â  Moved by their song, the other Trolls return to their normal selves, filling the surrounding area with a dazzling rainbow of light.

This is a far more emotionally impactful scene than anything I would have expected from the movie going into it.Â  It is made even more powerful by just how saccharine the rest of the movie is: how monotonously cheerful Poppy and her friends are throughout the story (bordering on, but never actually becoming, annoying).

Despite its creative pedigree, Trolls is built on a solid foundation of narrative and characters.Â  The animation is deceptively well-rendered: creating a fully realized world from subtle, scrapbooking touches.Â  It is something that the whole family can enjoy, be it the toe-tapping music numbers or the bizarre visual of two Trolls joined by the hair like a set of G-rated Siamese twins.Â  It’s a candy-coated adventure of surprising merit.