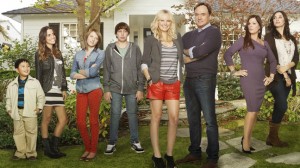 When you marry someone, you marry their entire family. On Trophy Wife, though, that goes beyond a meddling mother-in-law or excitable stepchildren and hits a new, potentially dangerous target – the ex-wife.

They say the third time’s the charm, and reformed party girl Kate (Malin Akerman) is hoping that’s true when she becomes Pete’s (Bradley Whitford) third wife. She fell into his arms (literally) at a karaoke bar, and a year later Kate’s got an insta-family, complete with three stepchildren and two ex-wives. Diane (Marcia Gay Harden) is ex-wife number one, an intense, over-achieving doctor and the mother of twin teenagers Hillary (Gianna LePera) and Warren (Ryan Scott Lee). Diane is quick to convey her withering disapproval of Kate’s barely tapped maternal instinct. Ex-wife number two, Jackie (Michaela Watkins), is mother to adopted son Bert (Albert Tsai), and can pull Pete’s strings with her special blend of neurotic, new-ageyness. Juggling all this baggage is uncharted territory for Kate, who finds support with her best friend Meg (Natalie Morales), a party-hearty singleton and the only woman Kate knows who has less experience with kids than she has.

Will you be watching Trophy Wife? How does the trailer make the show look? Is the show going to be a good pair with The Goldbergs?