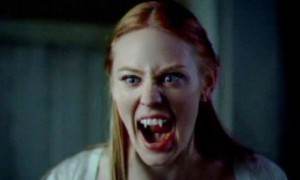 Perhaps True Blood 3.09 should have been titled “Everything is Random”. An enjoyable episode, it was also quite scattered, with a wide array of WTF moments.

First off, what’s with the RoboCop vampire security team? Do vampires really need Kevlar? The entire opening sequence, down to the Big Brother panel watching Eric’s (Alexander Skarsgard) interview just seemed…off. And a bit silly. Sometimes True Blood’s analogies are simply too on the nose.

Sam’s (Sam Trammell) epic beat down of Crystal’s (Lindsay Pulsipher) father also came from left field. Too many times, True Blood continues to sacrifice its characters for plot devices that have not been properly set up. Next week, we will no doubt begin to learn where the source of Sam’s inner rage springs from, but the problem is that we just got finished seeing him completely back away from situations at the dog fights where he could have used violence. Yes, he’s frustrated. His family is driving him nuts. There are things we don’t know yet about his true nature. But that doesn’t mean he should be able to change from a cute puppy dog into Mike Tyson overnight.

Sam’s Tyson impression also adds more fuel to this season’s overarching thematic debate: at our core, are humans made of light…or dark? And does the destruction we continue to reap on this planet provide overwhelming evidence for the latter? On the one hand we have Russell (Denis O’Hare), showcasing our most base instincts: our desires for power, bigotry, greed, and lust. Franklin (James Frain) gave us jealousy and obsession and Tara (Rutina Wesley) made sure to point out last night that this is a road that can only end with loneliness (and goo). With Eric we have our desire for vengeance. Jessica (Deborah Ann Woll) and Bill (Stephen Moyer) fall somewhere in the middle, a constant tug-of-war waging internally between both sides.

Jason (Ryan Kwanten) is pure instinct…unfiltered reaction without the annoying inconvenience of the rational mind. And Sookie (Anna Paquin) is our conscious. She’s literally the voice in our head warning us that what we are about to do may not be right.

Ball seems to be arguing that the answer seems to lie somewhere in the middle. We are made of both. It’s up to us to choose which side wins out, both internally amongst ourselves, but also as a larger society: one that embraces bigotry and separateness…or love.

Love, of course, will always be the answer. And whereas our characters turned away from love the first half of this season, unwilling to accept its necessary sacrifices and pain, they are slowly coming back to its sloppy, bloody embrace. They end up fighting not because they are on one side or another of the many issues this show tackles, but because they are protecting the person they love. And in the end, isn’t that all that matters?

Russell pulling out the media’s spine isn’t just a poorly veiled metaphor for gay rights or the issue of gay marriage. It was, perhaps, a condemnation of why anyone would WANT to embrace this culture’s most revered institution to begin with. Why fight to have equal rights in a society in which those rights are based on superficial principles to begin with? When the society you want to accept you is one of rampant commercialism, narcissism, and violence?

When Russell tells us that vampires will eat us (and our children) because it’s their very nature to do so, he’s fulfilling our deepest fears of The Other, he’s mastering the role of the scapegoat. THIS is what equal rights would REALLY mean. The destruction of our families. The very elimination of not only our sacred institutions…but of US. He is fear projected. The far right on steroids. And yet at the same time, he’s also completely deconstructing the entire issue.

True Blood can often be accused of being too literal, but much of that fault lies with the source material. You can only do so much when characters literally have light or darkness inside them. But the series has a chance now to do something really special with the last three episodes (sadly without Franklin…I was hoping he would join Tara in therapy, perhaps they could have appeared on In Treatment.) It’s a battle for the very nature of our souls. Let’s see which side wins out.