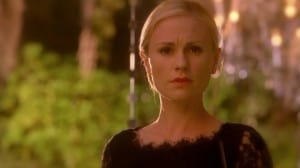 Historically, True Blood doesn’t handle resolution very well. This shouldn’t be particularly surprising: Most of the drama in True Blood is tongue-in-cheek. It’s an absurd show that knows it’s absurd. We watch it because of this tenor and (I suppose) because we like vampire mythology. But how do you sufficiently conclude a season of such a show?

The problem is, because the drama is often leavened with absurdity, the resolution always feels rushed and flat. “Radiation” also suffers from this issue. After Sookie welshes on her deal with Warlow because her friends are safe now, Warlow slaps her. He tells her that that is unacceptable and that he was just sought to use her this whole time, that her feelings are ultimately immaterial. Really? Well, you fooled me, Warlow.

Since Sookie first met Warlow, he has generally been portrayed as a dear. Now he is suddenly revealed to be–as she originally thought–sinister. Warlow breaks bad, fights with Bill in Fairyland, resurfaces in the real world, subdues Andy and Jason, corners Sookie in the bathroom, and dies within the span of 17 minutes! Slow down, guys! (Incidentally, I think it would have been much more prudent if they had spent some of last week’s throwaway of an episode to lay the groundwork for this.)

Also, Jason manages to escape from the subterranean chamber that Warlow locked them in with the aid of Andy’s daughter in a scant minute to deliver the coup de grÃ¢ce. How exactly did Jason escape so effortlessly? Warlow sealed the lock with his fairy surge; am I supposed to believe that a fairy of two weeks overpowered the magic of the legendary Warlow?

After Warlow dies, we cut to shots of Bill, Jessica, and Eric losing their mojo. Evidently, Warlow’s death has negated the magical properties of his blood. Eric’s scene is positively awesome! He is lounging atop a mountain in Sweden, reading a book in the nude. It is so surreal. Because he is the only one who is exposed to sunlight, he catches fire and we are teased to believe that he died. (I doubt that he is actually dead; he is such an integral part of the show. I suspect that Pam will save him in time.)

The other half of the episode concerns the fallout of Governor Burrell’s hepatitis v experiment six months into the future.* Apparently, infected vampires are feeding on humans and infecting them. Bill–I can’t believe I’m about to type this–has published a book and makes an appearance on The Last Word with Lawrence O’Donnell. He appears to be the foremost expert on this whole debacle.

*This also looks to be the crux of season 7 judging by the final shot of infected vampires encroaching on the social.

Bill has partnered with the newly elected mayor of Bon Temp, Sam Merlotte, to confront this festering issue. They propose a plan of togetherness, where humans have “monogamous” feeding relationships with vampires. “Every single human needs a vampire, and every vampire needs a human,” says Sam. Vampires will protect humans from the infected vampires, and humans will provide vampires with a hearty source of blood. Jason has Violet, and Tara unexpectedly has her notoriously derelict mother.

In its totality, season six of True Blood has been a tale of two cities for me. I enjoyed the first half of the season with their wacky fairy grandpa, but as soon as they introduced this Sookie/Warlow romance, it was very difficult for me to watch. I suppose the best thing about this finale is that Warlow is finally dead. It may have been quick and messy, but it’s a step in the right direction.