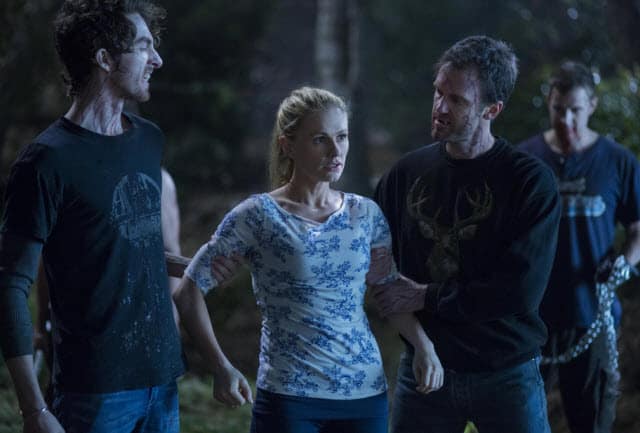 True Blood is systematically killing off main and supporting characters. Â It’s an interesting approach to a final season, because we’re left to wonder who, if anyone, will actually survive.

Last week Sookie knocked at Bill’s door with a dangerous idea in mind. Â She’s intent on using herself as vampire bait for the H-vamps so that they take her to where they’re keeping the other humans prisoners. Â With Bill nearby watching, the plan is to have him round up a rescue crew for Sookie and whoever else is still alive. Â I actually wish this set up had worked according to Sookie’s plan just to see everyone’s reaction to the worst, most OBVIOUS vampire hideout in Fangtasia. Â And yet, no one’s thought to check there before.

Of course though it didn’t get that far. Â By the time the vampires find a very impatient Sookie in the woods, literally everyone else has come to her rescue. Â As always, everyone was obsessed with saving and protecting Sookie. Â It was ironic that her whole reasoning behind handing herself over was so that no one else would die because of her. Â She spoke too soon, as we saw Alcide take a fatal bullet to his chest. Â Sookie was crying over his body in the end but she was literally just talking to her ex-boyfriend/first love Bill about how she’s not happy with her relationship. Â “I’m afraid that I don’t love him as much as he loves me,” Sookie admitted to Bill when asked if she loves Alcide. Â Add to that completely normal conversation between exes the whole bit about Bill physically being a new man since he was drained of all his blood, but still having to live with his past unforgivable indiscretions against Sookie. Â It’s more obvious than ever that these two are going to end up together but at what cost? Â And will it be worth it for them to get a happy ending if almost everyone around them ends up dying in the process?

Alcide wasn’t the only recurring character to die in this episode. Â Mrs. Fortenberry was aiming to kill Jessica when the mob of humans confronted Andy, Jason, Jessica, and Violet. Â She actually took a shot at her but Violet surprisingly reacted and ripped the bitter old lady’s heart straight out of her chest. Â Maxine Fortenberry has always been one to run her mouth and make her unfavorable opinions about vampires known so her death at the hands of a vampire was a long time coming. Â Jessica wasn’t healing from the wound yet, which makes me wonder what kind of bullets the vigilante group is using in their guns. Â Even if they are silver, Jessica should be able to heal eventually. Â Otherwise she may be the next character to meet her true death.

This final season isn’t as together as I’d hoped it would be. Â Pam had been searching the world for Eric and finally found him alive but infected with the virus. Â That’s fine, just another character’s fate that’s hanging in the balance. Â He seems content with laying low to die a slow death but Pam finally motivates him with revenge against Sarah Newlin, the woman partially responsible for Eric’s sister’s death.

Sarah has been M.I.A. since Jason let her escape from the vampire camp last season but viewers got to see where she’s been hiding out for now. Â No longer a blonde Christian, she’s a brunette guru-loving yoga student by the name of Noomi (“new me”? clever disguise, Sarah.) Â Her past involvement with the Japanese TruBlood company catches up with her as they brutally murder her teacher/guru while she’s just outside the room fetching a bottle of wine.

For some odd reason, this TruBlood company and the Yakimono men will be playing a big role in the story as we go forth. Â Through flashbacks to Pam and Eric’s past in France in 1980, we saw the beginning of their confusing involvement with the beginning of the synthetic blood drink. Â I’m really not entirely sure why they were after Eric at all, or why we had to see even more flashbacks. Â Isn’t it a little too late in the game to fill in pieces of Eric’s past, especially when his future is so threatened?

It’s pretty weird in general to bring back old familiar faces (Sarah, Nan Flanagan in flashbacks) while killing off others who’ve simply outgrown their relevance to the central story. Â I wonder who else we could possibly see before the end of the series. Â Maybe Hoyt? Â I’d love to see him back, only if he survives though!

Lafayette and James are off in their own little C-storyline bubble again. Â Bonding over their common interest in drugs and James’ unhappiness in his relationship with Jessica brings them closer than before. Â There was another close call when Lafayette wasn’t waking up from his high. Â Not cool, Lafayette needs to make it out of Bon Temps alive.

One last loose end to talk about are the recurring flashbacks to Bill’s family. Â Every episode in this season so far has had a brief flashback to his human life with his wife and young children. Â I wonder how this is relevant to the current story at all. Â Could Bill become human again and live a normal life with Sookie? Â That seems like the only logical explanation for his memories. Â We’ll have to stay tuned to see where this is all headed.