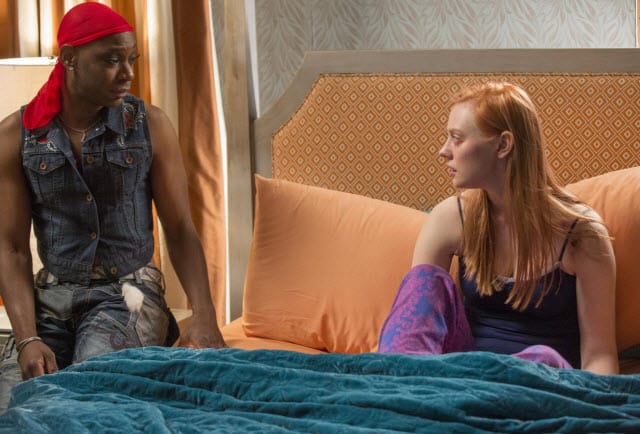 A few more familiar faces returned in one way or another on last night’s True Blood. Â Fortunately no major deaths occurred but that just means we’re probably due for one next week if there’s any logic behind Tara and Alcide’s deaths being 2 episodes apart.

The wolves may be making a return soon, or at least just Alcide’s father Jackson. Â Sookie called him to deliver the bad news of his son’s death. Â He said he’ll make plans to come back to Bon Temps but really at this point I hope it’s just for a proper funeral for Alcide. Â There’s no reason for the wolf pack to get any more screen time than it already foolishly had in years past.

Jason calls Hoyt about his mother’s death, and he also is making arrangements to come back to Bon Temps. Â Hoyt’s been in Alaska since season 5, starting fresh after asking Jessica to erase all traces of her and Jason from his memory before he left. Â As long as Hoyt is kept safe (and human) by the end of the series, I’ll be glad to see him back. Â Please don’t bring him home to kill him off with everyone else!

Sookie was pretty big into girl talk this week. Â When she was visiting Arlene’s kids, she dispensed some unsolicited advice to Lisa when her brother Coby didn’t want to talk to them. Â “It’s hard sometimes for boys unless they have a ball with them. Â I don’t know why but it’s true.” Okay, then. Â Moving right along, Sookie was able to get Holly to tell her where she had been held prisoner by the infected vampires. Â Before she left Andy alone with his distraught girlfriend, she told him that women like to be held. Â She’s just on a roll with her womanly advice when her next stop is Bill’s house. Â She asks for a moment alone with Jessica when she sees that Bill and James are having a hard time convincing her to eat because apparently what she needs to hear should come from a woman. Â In actuality, Sookie doesn’t help Jessica’s guilt over killing Andy’s daughters. Â Instead she straight up says, “I’m sorry but I just don’t give a f- about you or your problems.” Â Just…no comment.

Keep in mind that this is the same day of Alcide’s death early that morning. Â Sookie’s already at Bill’s house, asking him to call on any and all vampires willing to help fight when they go to Fangtasia that night. Â Because Sookie wants Bill to be at his strongest that night, she offers her blood to him. Â Bill asks if she’s sure about this, and she replies, “it’s just lunch.” Â Meaning the writers are absolutely working up to a full course dinner and dessert by the series end.

Pam and Eric have a private flight back to the States from France, making their first stop be in Shreveport. Â Through flashbacks to 1986, we saw how they became business owners in the first place. Â The Magister of the Authority appointed Eric as sheriff of area five, as well as designated he and Pam as the owners of a video shop. Â In a time jump to 1996, we see how Ginger got involved with the vampire business. Â She was interested in renting out some vampire movies for a college course, but once she laid her eyes on Eric she asked for a job application. Â Another 10 years goes by, and in 2006 she presented a ratty old throne to Pam and proposed they turn the shop into a nightclub now that vampires were publicly out of the coffin. Â It was cool to get more of Ginger’s history with Eric and Pam, but unless this has a relevance to Eric’s current predicament I really hope this wasn’t just wasting time.

One small aspect of the flashbacks to Eric and Pam acquiring the video shop actually came in handy in the present when Eric visits Bill’s house and is reunited with Sookie. Â He catches her up on his world travels and asks what kind of trouble she’s gotten herself into this time. Â When he hears that her friends are being held in the cellars of Fangtasia, he offers to show them the underground tunnel from the Underground Railroad in the basement of the building.

Bill, Jessica, James, Violet, Eric, Pam, and James’ drummer friend turned vampire named Keith are the only vampires willing to help infiltrate Fangtasia. Â Of course Sookie and Jason go along for the ride, and it’s a miracle they all made it out of there alive. Â The humans set fire to the bar just as Eric, Sookie, and Bill are inside waiting to make a move to save Arlene from bleeding to death. Â A fight breaks out in front of the bar, where the healthy vampires are able to kill all the H-vamps as well as the handful of angry humans.

Arlene is dying from extreme blood loss as Sookie stands by helpless. Â She can actually see what Arlene is seeing when she’s talking to Terry, another blast from the not too distant past since he just died last year. Â He’s on the “other side” and tells her how much he loves her but he knows that she needs to stay for her kids. Â The new guy Keith feeds her his blood, and she survives (for now!)

All the infected vampires at Fangtasia were killed, but does this mean that storyline is also finished? Â Or is it possible that there’s more in hiding elsewhere around town? Â It seems too easy for that to be the end of this threat. Â Only a few of the humans were there, so will the rest of the angry mob keep attacking even the “good” vampires out of fear or will they be lost without their leader Vince?