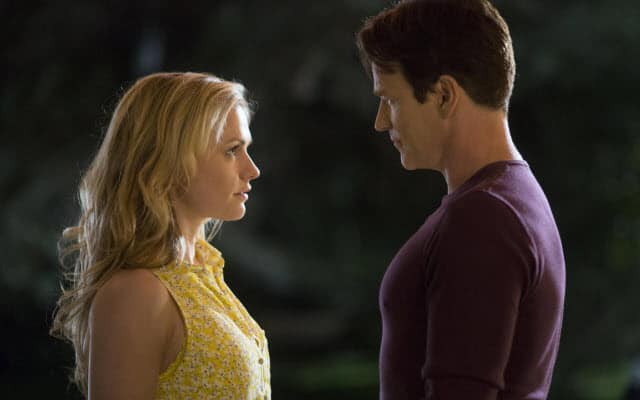 This week’s True Blood is the midpoint of the season, and what a strange season it’s shaping up to be. Â Hep-V is still prevalent to the storyline even though the group of rabid infected vampires were eliminated last week. Â Now with two of the main characters being sick with the virus, a cure better be in the works somewhere.

One thing I admire about True Blood is its pacing. Â They don’t normally have any huge time jumps. Â If you were to look at a timeline of all the events since the first season, it’s probably only been a couple of years since Sookie and Bill first met and all this craziness of werewolves, witches, fairies, and vampires happened in a whirlwind since then. Â It makes sense that Alcide’s death is still fresh in everyone’s mind, including Sookie’s. Â She had me fooled in the last episode when she offered her blood to Bill like it didn’t mean anything. Â Anyway, she’s finally allowing herself to grieve over her latest loss. Â She barely had any time to cry over Tara but at least this party to celebrate Tara and Alcide’s lives kind of helps her.

Jackson was there to eulogize his son, and consoled Sookie by telling her that his son fought for worthy causes and she must’ve been worth his heroic death. Â That’s sweet and all, but Sookie wasn’t in any immediate danger when the humans shot Alcide. Â Lettie Mae drugged her husband with sleeping pills to sneak out to this party. Â Even though she did stab Willa to try to get some of her blood to be able to see Tara again, Lettie Mae did take a moment to give a nice tribute to Tara for dying a hero and protecting her when she probably didn’t deserve it.

It wouldn’t be a party without some secret hookups. Â James and Lafayette finally give in to their mutual attraction after James is feeling ignored by Jessica yet again. Â She catches them doing it in the car that she and James bought together. Â She overreacts and curses him out, but Lafayette eventually talks some sense into her. Â “If you don’t love him let him go and I will take over from here,” Lafayette says after he proves that he actually took the time to ask James about his past and James cared enough to share with him.

Jessica quickly gets over James when she’s alone with Jason. Â He even shares his secret that he doesn’t necessarily want to spend the rest of his life with Violet, but he’s probably too scared of her to ever try to break things off between them. Â He should be terrified. Â I fear for everyone’s lives now that Violet heard Jason cheating on her with Jessica. Â Remember how Hoyt is supposedly coming back to Bon Temps? Â I really hope Violet doesn’t know about his past with Jessica and Jason because that could be part of her revenge to either turn or simply kill Hoyt.

Nicole was probably the only sober one at the party. Â She spoke up for many of the viewers when she let everyone know how crazy they all are acting. Â They live in a town where humans and supernaturals alike are being killed or kidnapped left and right and instead of crying about it like people should, they’re partying. Â She obviously missed Lafayette’s inspirational speech to Sookie when she voiced similar opinions opposing the party he had planned in her house.

Bill was moping around and for the most part he was preoccupied with memories of his human life. Â By the end of the episode, Bill discovered he is infected with Hep V. Â That shouldn’t come as a surprise, but it is puzzling to wonder how he contracted it. Â He’s been as strict as everyone else with his diet all year, so maybe it’s possible to catch it other than by drinking an infected person’s blood. Â Or maybe Sookie was infected when she was covered in the bloody remains of some of Holly’s Hep V captors the night that Alcide was shot. Â I suppose that’s the most likely explanation, otherwise it could be possible for every vampire to eventually contract it no matter how careful they may be.

Last but not least, I have to talk about Eric and Pam. Â They were off to Dallas in search of Sarah Newlin’s parents and sister, but little did they know they’d run into Sarah “Noomi” Newlin herself at the Republican party they crashed. Â The Yakuza stormed the party for Sarah but Eric saved her from them by literally ripping the face off the face of one of the men. Â It was a pretty gross scene, am I right?

Before this whole party though, Eric and Pam had some fun. Â After meeting Sarah’s vampire sister Amber and learning where their parents would be that night, the vampires dressed each other. Â Eric shopped for the gaudiest dress for Pam, and she picked him out an appropriate Texas suit complete with cowboy hat. Â The reality of Eric’s situation really hit home for Pam when she saw that his virus has rapidly spread and he’s further along in stage 2 than she had thought.

Hopefully Sarah Newlin will be the key to a cure for the virus. Â Not for her sake, but for Eric and Bill’s. Â In the preview for next week, Bill’s virus is spreading faster than normal. Â If I had to place bets, I would bet on both of them surviving in the end but I can’t say the same for anyone else now that Violet is royally pissed off at Jason. Â She’s not one to control her emotions, and it looks like she’s after Adilyn because she knows that Jessica is protecting her.

Now it’s your turn to sound off in the comments. Â Who do you think will survive the series? Â Anyone? Â No one?