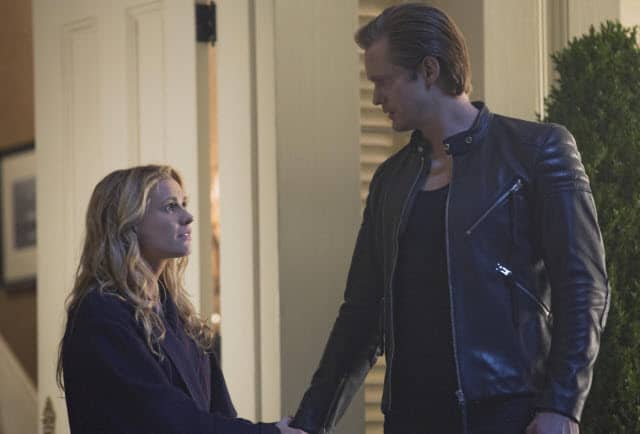 We’re really in the homestretch now with only two episodes of True Blood remaining. Â Storylines that have been dragged out unnecessarily all season long are finally starting to get wrapped up, including ghost Tara’s mission ever since her death in the premiere.

Lettie Mae had roped Lafayette into helping her contact Tara, and this week she even convinces her husband to join her in drinking vampire blood to see Tara for himself. Â All Tara’s been trying to do is show Lettie Mae that she needs to forgive herself and let her go. Â I don’t know where I was expecting Tara to lead her mom and cousin, but the memories of Tara’s abusive father certainly shed light on why Lettie Mae was misunderstood as a bad parent.

Another example of a storyline/character that’s taking up way too much time this season is Sarah Newlin. Â Last week we learned that she ingested the antidote to the Hep V virus so I thought that once Mr. Gus and Eric found her, she’d be a goner. Â Turns out that’s not the case. Â Although the Japanese company was able to already synthesize her blood to sell and make a profit, they’re keeping her alive in the basement of Fangtasia. Â It seems a little backwards that this minor character could possibly make it too the series finale and yet Tara, who’s been on the show since day one, might have made her last appearance this week.

Anyway, Sarah’s blood truly is the cure as it worked for Eric. Â His first stop that night is to visit Sookie just to let her know that he’s okay. Â He wasn’t expecting to hear that Bill is also sick but much worse off. Â Eric really should’ve known better than to tell Sookie to stay put because she took off to go right to Fangtasia then. Â It was there that Eric had to save her yet again by pretending to be glamouring her to make her leave. Â Except while she was playing along with Eric’s fake glamouring, she was able to listen in on Mr. Gus’ thoughts that said he didn’t trust Eric and Sookie together but Eric better not betray him knowing what’s in the basement. Â Surprise, that’s where Sookie finds Sarah Newlin still very much alive!

Instead of just finding some sort of vial or bottle to take some of Sarah’s blood back to Bill, Sookie stupidly decides to bring Bill to the source that next night. Â Now they’re all in danger of being found by Mr. Gus’ men left behind to “keep Eric company” while the boss was away. Â To make matters worse, Bill refuses to drink Sarah’s blood. Â For whatever reason I guess he wants to accept his fate but really couldn’t he have saved them all the trouble and said that before they left his house?

There were a few possible hints dropped regarding Sookie. Â For one, she asked Bill out of nowhere what his exact instructions were when he was originally sent to Bon Temps to find Sookie for Queen Sophie Anne. Â He said that she had plans to collect all the known fae and breed them. Â Maybe it was because of this conversation or maybe Bill’s subconscious knows something that Sookie doesn’t even know yet, but Bill has a strange dream of finding Sookie holding a baby that was presumably his. Â When he got closer to her, he saw that the bundle of joy was actually nothing but a black void. Â Creepy, but what does it all mean?

Last but not least, there’s a confusing love triangle between Jessica, Jason and Hoyt. Â Hoyt actually saved both of them (and Adilyn and Wade) from Violet when he followed Jason there. Â Yay, thank god Violet’s gone! Â Even though Hoyt doesn’t remember Jessica and he thinks he’s meeting her for the first time with his current girlfriend in tow, he can’t shake his attraction to her.

None of them really know what they want yet. Â Jessica and Jason have an honest conversation about their complicated relationship where she sums it up by saying that what they have is a beautiful friendship. Â This could really go either way, but at this point it seems that Jason could possibly end up with Bridget, Hoyt’s new girlfriend. Â That would at least allow Jason to get out of Bon Temps and have as normal of a relationship he can possibly have, but I also really think Jessica is the best option for him. Â Oh well, as long as all three characters survive the series finale I’ll be happy.

What’d you think of this episode?