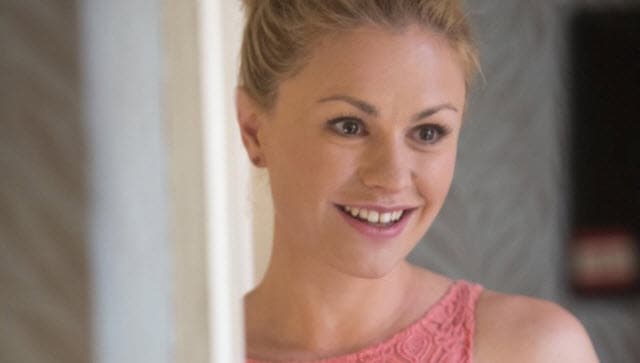 Series finales are a tricky business. Â There’s no way to please every single fan so more often than not a majority of fans are immediately disappointed and voicing their frustrated opinions online. Â I personally enjoy series finales and focus on finding the silver lining rather than get angry. Â Obviously there are major True Blood spoilers here so if you haven’t watched yet, come back after you do.

It was a brave move to go ahead and actually kill Bill. Â I was half expecting him to be Sookie’s husband in that time jump. Â Maybe there would have been a miracle and we’d just never quite know how exactly he came back as a human. Â Just imagine if that happened, people still wouldn’t be happy. Â Sookie’s romantic relationships have been a huge part of the show over the years with Bill, Eric and Alcide always considered high on the list (maybe even in that order.) Â Bill’s whole point in welcoming his True Death was to allow Sookie the freedom of a normal life. Â Of course he was also ready to be reunited with his family, so in that aspect I guess all those flashbacks to his human life all season long were somewhat justified.

Bill’s fate aside, everyone else pretty much goes on to live happily ever after. Â Eric and Pam finally wised up and got rid of their Mr. Gus problem, which left them a huge fortune to earn from New Blood. Â They’re millionaires now, but that doesn’t stop them from keeping Fangtasia open while running a little side business down the basement. Â Sarah Newlin is somehow still alive but chained up as a prisoner there. Â (That minute or two of her being haunted by Steve was probably unnecessary though because it was pretty clear that she’s living her own personal hell as a vampire blood bag against her will.) Â It did feel like a bit of a cheap ending for Eric and Pam in the sense that money is apparently all they needed to be happy.

A very pregnant Sookie and her presumably ordinary human husband hosted Thanksgiving in the flash forward. Â Literally everyone (except for Eric and Pam) gathered together out on Sookie’s lawn. Â Sam and Nicole came back and now have two kids, Jason and Bridget have three kids. Â Adilyn and Wade looked pretty cozy so it’s probably safe to assume their parents marriage didn’t stop them from being together. Â Lafayette and James appear to be endgame as well. Â Actually the only single adult at the table was Willa.

Hoyt and Jess’ wedding was cute, and it was very nice to see Bill get to walk at least this “daughter” of his down the aisle since he never got to see his biological daughter grow up. Â When Sookie started to be able to hear Bill’s thoughts at the wedding, I for sure thought that meant somehow her infected blood was reversing his vampirism. Â She said it herself when she was telling Jason about how Bill’s illness has only made him feel more human as it gets worse. Â It would’ve been a weird cure to vampirism but not the craziestÂ thing to happen on this show.

Most of the couples were firmly established over the last few episodes, only leaving Sookie and Jason’s relationships as to be determined. Â Speaking of Sookie and Jason, they had some long overdue brother-sister bonding time in this episode. Â Even Tara got a few mentions, as well as appeared in one of Sookie’s flashback with Gran!

Overall it was a weird but not entirely unexpected finale. Â The surprises were definitely shocking, especially since all season long it seemed like Sookie and Bill were endgame. Â The identity of Sookie’s husband in the future shouldn’t matter so much to all the fans who are already finding every aspect to nitpick. Â Bottom line is, she’s happy otherwise she wouldn’t have staked Bill herself. Â Bill was happy with his choice. Â Sam, Jason, Arlene, Andy, Lafayette, Jessica and Hoyt are all alive and well. Â It all worked out for the best.

Summers won’t be the same without the Bon Temps crew on TV. Â I’ll miss this show for all its ups and downs. Â Whether you stuck with it all these years or you just tuned back in to catch the series finale, are you going to miss it too?