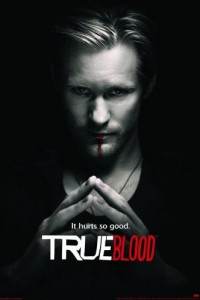 HBO Has released the episode descriptions for the last few episodes of this season of True Blood, and they sound absolutely fantastic. For starters, what about having Eric playing hero this year? Much better than that love-struck puppy routine, that’s for sure. With humanity and the Authority at the brink of war, though, Eric certainly makes for an unlikely savior given his history on True Blood. Not that we should mistrust him, but his more mature stance through this whole crisis might have been the one good thing to come out of his relationship with Sookie. Is there hope for them after all?

Eric (Alexander SkarsgÃ¥rd) embarks on a final, desperate mission to overthrow the Authority ï¿½ and save Bill from losing his humanity. Andy (Chris Bauer) faces the consequences of a light pact he made; Alcide readies for a second showdown with J.D. (Louis Herthum); Sam and Luna test their limits in trying to escape the Authority.