When it comes to picking television shows, you need to choose carefully. You need to pick a show you can get behind, one that you can rely on. It’s like choosing a girlfriend, albeit one you only see for an hour a week. It has to be a show you can stand proudly behind, saying “That’s my show!” when it wins awards or gets a smattering of critical adoration. It needs to be a show you can tell your friends about, one that you can bring home to your parents. For me, Fringe is that show. And it all goes back to the writing staff of the show, headed up by the wonderful Jeff Pinkner and J.H. Wyman. I trust them more than I trust any other writing staff on television, bar none. That’s a pretty big claim, and one I don’t make lightly.

What does it take for a TV writing staff to gain my trust? The answer is both simple and complex: the show needs to be something I can rely on. It needs to be a show that’s consistently amazing, week after week, while at the same time it needs to be something that commitment to pays off. A show can have consistently good episodes without really going anywhere in terms of overall plot, and conversely can have consistently mediocre episodes that advance the plot light years every week. Oh yeah, and you can’t just make up the plot as they go along (LOST, as wonderful and dear as that show is to me, meets the other two criteria but falls a bit short on this last one).

But Fringe, unlike every other show I’ve seen outside maybe The Wire, feels like it’s constantly going somewhere. Each episode is a propulsion forward: sometimes small, sometimes large, but always in the right direction. Every scene feels like it could be important, and often it is. Fringe doesn’t utilize the slow burn technique that other shows in its vein do. It quickly brings the mysteries to a boil, and then answers them while they’re still hot. Sure, the mysteries are smaller, but they’re just as compelling, and provide for very watchable television. It’s impossible to miss an episode without knowing you’ve missed an important moment, whether it’s Olivia finding out about Peter’s lingering feelings for Altlivia or the fact that Sam Weiss authored the books on the First People, as in “Concentrate and Ask Again.” The story’s constantly moving forward, never spinning its wheels, and it doesn’t feel rushed in the least bit. Those mysteries haven’t been boiled until they’re too hot or too cool; they’re juuust right. And, at the same time, the episodes by themselves are marvelous pieces of work. I point you no further than the episode “White Tulip,” a well-written standalone that also advanced Walter’s understanding of the events that were about to happen with Peter, or “The Box,” which furthered the season-long arc of the machine while still providing more casual audiences with a compelling case… and exploding heads. 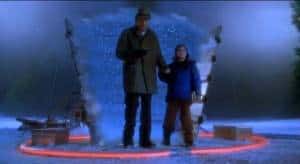 That covers the first two criteria, but what about the third? How do we know that Jeff Pinkner, J.H. Wyman, and the rest of Fringe‘s writers aren’t just stringing us along as they quickly hurry to scribble down the next part of the story? They’ve told us they have a plan for both five-year and seven-year runs of Fringe, and I don’t see any reason not to believe them, especially when you look at their track record. The show’s storyline writes checks that it doesn’t cash until a year later, in another season. Take, for example, the episode “The Arrival.” In that episode, Walter tells Peter about the Observer saving his life after their car had an accident and went into the ice. Then, thirty-two episodes later, we see that scene take place in the episode “Peter.” In fact, that Walter had even lied to Peter about that night was an indicator that something was amiss — as we would later find out, he kept the truth under wraps because that incident happened right after he’d stolen Peter from another universe. It really seems too perfect. And perhaps the most telling part is that we have to make these connections ourselves. The show rarely puts these smaller pieces together as though asking us, “See how clever we are?” They expect viewers to be as clever as they are, and that confidence should be reciprocated. It says more about the show — and whether the writers are just playing it by ear — than anything else the show can do.

So when I hear people fretting about how season three ended, I’m a little frustrated. What do you mean, you think it’s all a dream? Are you watching the same show I am? Have the writers not earned your trust this far? or Are you seriously asking how they’re going to explain that, as though there’s some chance that they’ll botch it? These are the writers of Fringe we’re talking about, dammit! They probably thought of that problem long before you did!

Is it foolish for me to place all my confidence in these writers? That’s for you to decide. I, for one, believe that the writers of Fringe won’t lead their show — and, by extension, me — astray. Fringe is the show I want to stand behind, to put my trust into. It’s paid off for me (and millions of other Fringe fans) so far, you can’t deny that. More than any other show on television, I have confidence that Jeff Pinkner and J.H. Wyman will give me a great story, week after week, as they have for the past three years. That‘s a show you can bring home to your parents.