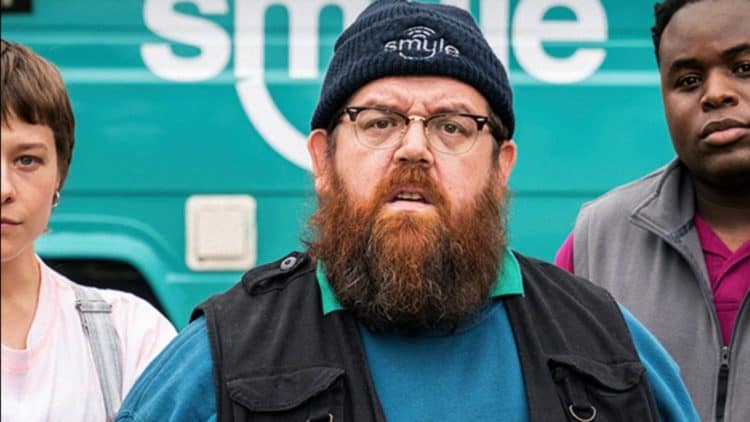 It’s a bit tough to know when Nick Frost is joking and when he’s being serious, but apparently, his time on Truth Seekers, which is coming to Amazon, was inspired by a real-life encounter as he tells it since when he and his buddy Simon Pegg were shacked up together they apparently had a female ghost that had come with their home. The manner in which he said this was pretty nonchalant so it’s easy to think that he might have been kidding, but when he went back to it the feeling is that he was being at least a little sincere since he wasn’t writing it off as a joke. Ghost stories are something that a lot of people still can’t figure out entirely since some of them are pretty easy to explain since they can be boiled down to one thing or another that might have happened and thereby be given over to very mundane happenings. But if what Frost relayed was real, then it’s very likely that his belief in the supernatural is completely valid since it would appear that he’s been in contact with the paranormal before. A lot of us have ghost stories that we might not be able to explain and might even have a sensitivity to other frequencies that exist in this world that many just don’t have or don’t understand, or both. The fact is that a lot of people won’t believe in the paranormal because they don’t want to be taken for a fool, and they don’t want to be viewed as a kook by the rest of society.

Even admitting that ghosts and various other paranormal happenings could be real is enough to get many people to roll their eyes at you since the occurrence of said happenings is often hard to catch, but in many cases, it would appear to be very real. The debates that have gone on and on over the decades concerning ghosts have been quite heated at times and dismissive at others since those that are deep into paranormal research are often looked at as less than scientists but slightly more than anyone else since they are attempting to prove a hypothesis that many people feel has been disproved while others feel is completely valid, that ghosts do exist. Such a thought has been ingrained in the human psyche for a long time now, and Truth Seekers is just one of many shows that have been created to highlight this belief and create an entertaining time for audiences that either do or don’t believe to watch and have fun with. It doesn’t matter if you believe or don’t, shows like this tend to be a lot of fun since they go out of their way to make it fun and to showcase the belief that many people have in the paranormal.

Maybe you’ve been in a strange place once or twice and felt the prickles on the back of your neck for no reason, or heard and felt the sudden quickening of your breath as an unexplained noise sounds in the near distance. Many people would attempt to rationalize these feelings in a number of ways that would make perfect, logical sense to them, while others would simply stand still and hope that nothing jumped out at them. A paranormal investigator might listen carefully and try to sort out just what they were feeling and why. It’s not really a practice that demands the bravest people in the world, but it does require some nerve to travel to the places that people that are into this visit, and a lot more to stand in places that are said to be steeped in history and have possibly absorbed the energy of many an individual in one way or another. The many stories and tales that are researched and checked out by paranormal researchers are of great interest to many people, as many shows have made it clear that there are things in this world that we don’t fully understand for one reason or another.

It’s kind of interesting to think if Nick and Simon actually looked up the history of their home to see just what might have happened to a previous tenant, or if they simply had a wandering spirit that was intent on bothering them for some reason. As a lot of paranormal researchers might tell you, ghosts do have a purpose that they’re trying to achieve. One has to wonder what the ghost that was bugging Nick and Simon was all about, since spirits, as it’s said, don’t just come and go as they will all the time, as a lot of them are trying to sort out something that they didn’t do in life or to tell the living something. Of course, a lot of people just don’t want to listen since they don’t want to admit that anything is there.