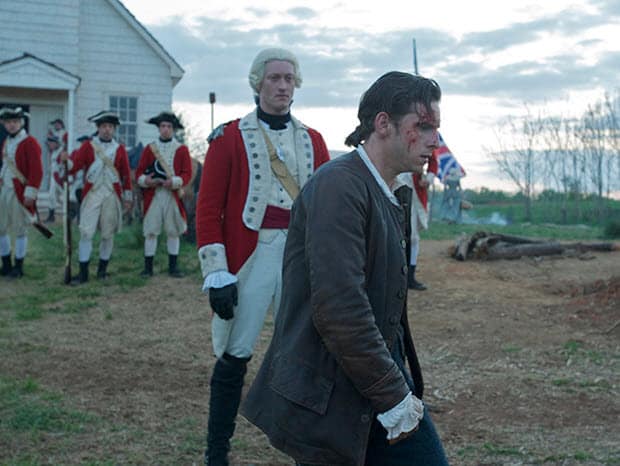 Instead ofÂ The Walking Dead,Â I turned my TV to AMC at 9 P.M. EST this week to watch AMC’s new Revolutionary War drama,Â Turn.Â I’ve always had a fascination with anything involving history (fromÂ The PatriotÂ toÂ Scooby Doo and the Witch’s Ghost) and I was very excited to “turn” in that direction. I promise to keep the recap shorter, in case you want to see it for yourself.

The story follows Abraham Woodhull (Jamie Bell), who is the colonial farmer to end all colonial farmers. He lives a quiet life with his wife and child, in a British controlled town. He farms heads of lettuce, and on the surface seems to have a pretty boring life. His life takes a turn, however, when he visits the local tavern to repay part of a debt that he owes. The owner of the bar gets into an altercation with a British soldier, and Abe (being the moral man he most obviously is) steps in, which gets both of them arrested. Â Abraham is lucky (well, depending on how you look at it) because his father (Supernatural’sÂ Kevin McNally)Â is a staunch British loyalist who is very close with the Major of the regiment occupying their town. So Abe gets out of trouble but his friend isn’t so lucky. This friend is married to an old flame of Abraham’s, Anna (Boardwalk Empire’sÂ Heather Lind), whom Abe is now charged with protecting.

To further complicate things, the British soldier responsible for the inciting incident was found dead the next morning and Abe was nowhere to be found. Abe, it turns out, has been reunited with some old friends who are soldiers for General Washington (yes, THAT General Washington). They are desperate to turn the tide of the war and enlist the help of their old friend Abe, who is (understandably) reluctant. He seems set over the edge, however, when the new captain (claiming the title from the old, dead one Abe is suspected of killing) is quartered at Anna’s home and “goes all creepster” on her (if you watch it and think of a better way to describe it, I implore you to share it with the class!). To get revenge, he agrees to help his friends and provides them with information about a planned attack on a “rebel safe house”. The intel is correct, and the American soldiers gain a victory, thanks to Farmer Abe.

I know this is just the first episode, but I already really like the direction this show is headed. Sure, the Revolutionary War is an overarching plot that we all know well, but it’s the characters that make this interesting. Abraham is quartering a British soldier in his home, and his father and wife desperately want him out of trouble. Anyone could tell you, though, how hard it is to say “no” to your oldest friends. Abraham spends the entirety of the hour and a half opener between a rock and a hard place. If there’s one thing that AMC does well, it’s characters. I’m definitely a nerd, but I’m also very interested in where Abraham’s story is heading, and how it affects the people in his life.

The acting, costumes, writing and everything were very convincing. The rest of the cast (includingÂ ChuckÂ villain Angus McFayden) was just as good as the main characters. The production cost is obviously high, but it pays off in a big way. This first episode got me wanting to know everything about Abraham Woodhull and the people in his life. It seems like a more than adequate replacement for The Walking Dead sized hole in my Sunday night. Did anyone else watch? What did you think? Are you as anxious to learn about the Culper Ring as I am?

I was very satisfied with the way this episode turned out and I’m anxious to see more. What do you say? Will join me in some educational yet well-produced drama next Sunday? Either way, I’ll see you then!