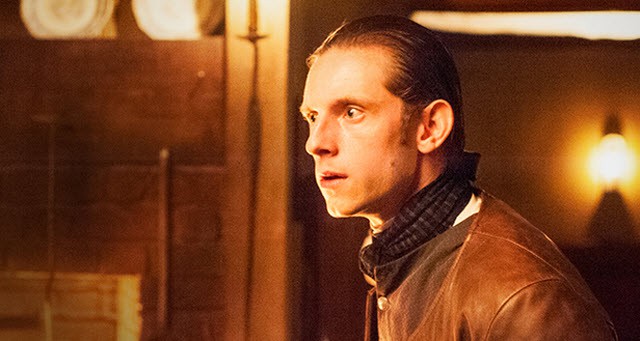 Another week, another episode of juicy spy-dramaÂ Turn.Â This week’s episode was character focused, but it really set up where the characters are going and just how interesting the back half of this season is going to be. Normally, an episode ofÂ TurnÂ brings several characters into focus and leaves out a few. This week, they put as many in focus as they possibly could.

It’s Christmas time in 1776. The war has stopped for the holidays (how polite of everyone!) and Abe wants to go to “York City” to do some business. Ben and Caleb get a secret mission. Robert Rogers returns (finally!) and Anna Strong(and her husband)’s slaves are released. The release of the slaves was to punish her husband the patriot, and it came at the order of Abe’s father, the magistrate. Tough cookies!

Some of Anna’s slaves that are being released are pulled into focus during this episode. In particular, her “chamber maid” Abigail (who can read) and her son (who can also read) were in the spotlight. Abigail is first excited to be free, until she finds out that she is really being sent to work for John Andre, from whom she will then EARN her freedom. Kinda sounds like a raw deal either way, doesn’t it? The male slaves are sent to join the war effort, and Abigail is sent to Andre, but not before deciding that she would spy for the rebellion. She is forced to leave her son behind with Anna, but Abigail moves forward with her plan. Of the slave characters introduced, Abigail is extremely compelling, and it’s interesting that a slave would be the next spy introduced for the patriots.

Meanwhile, Robert Rogers has returned, and he is anxious to speak with the captive patriot general in John Andre’s charge. Â John Andre does not want that, but as soon as Andre leaves, Rogers takes the opportunity anyway. Turns out (see what I did there?) that Rogers and the General fought side by side in the 7 years war, so the two of them enjoy a nice dinner with Andre’s actress-turned-spy lady friend until Rogers insults the General by calling him a traitor. This entire segment with Rogers makes you wonder exactly what he wants with this guy until the very end. Rogers was after the name of the soldier that escaped the massacre back in episode 1. The general, seeing no way out, gives him Ben Tallmadge’s name. Uh-oh!

Abraham and company had probably the most compelling story of the night. Abraham is still seething with rage after his father desecrated his brother’s headstone in service of the British army. As a result, Abe refuses to spend the holidays with his father, and instead is actively seeking out more spy work to do. He turns to Anna, but she is deterred by the loss of Abigail and the rest of her crew. Ironically, Anna is usually the one encouraging Abe to stay in the spy game, but this week Abe is upset that Anna doesn’t think she can help. When Abe returns home from Anna’s, he learns that Mary is planning on taking Thomas (their son) to his father’s house. Abe initially forbids it, but relents when he learns that Thomas is sick. However, he refuses to go along. So, Abe spends his holiday at home, getting drunk and firing his rifle into the air (which honestly sounds pretty fun) until Anna comes for a visit. She drops off some silverware that she doesn’t want the soldiers to get their hands on, and informs Abe of Abigail’s plans. When his drunkenness elicits a “who cares?!” response, Anna turns to leave but Abe stops her…and after 4.5 episodes of romantic tension, Abe and Anna finally kiss. They actually planned to take it further but Abe forgot that a British soldier is quartered in their home, and he walks in on them, scaring Anna away. The soldier begs Abraham to join his wife and son at his father’s, and Abe obliges.

Ben and Caleb, while not the meatiest of stories this time, have an interesting turn of events nonetheless. They go on a secret mission, and even though Ben falls out of a boat and goes out of commission for a couple of days, they accomplish said mission. Turns out, the mission was ordered from General Washington based on Abe’s intelligence. I saved this part for last, not because it was the best of most significant story of the night, but because at the end, the big reveal was Ben coming face-to-face with General George Washington. As the episode ended, General Washington asks Ben, “Who is Abraham Woodhull?” Pretty cool right?

Acting superlative was tough because there were a lot of different stories and characters to cover. The standout from this week, however, had to be Jamie Bell‘s Abraham Woodhull. Every actor on this show is great, which is what makes this show fun to watch, but Bell showed us a side to Abraham this week that we’ve been clamoring for since week one. This week, Abraham was blind with rage and patriotism. He kissed Anna, showing us all that Abe still has some courage, and (most importantly) he hilariously got drunk and fired a rifle in the air in his field. In this episode, Bell showed us the true colors of Abraham. Rather than being conflicted, Abe decides what he wants and goes for it, and it was a welcome departure from previous episodes.

While not as exciting as others have been, this was still an extremely important episode. There was some important character development for almost all of our main players, and they introduced General Washington, which I can only imagine will have a huge impact on the remaining 5 episodes. I’ve found the story extremely compelling thus far and I’ve yet to be deterred. I hope that you’re all still watching with me! I’m anxious to see where the story is headed.

What about you? Are you still watching? Were you ever? Let me know what you think!!