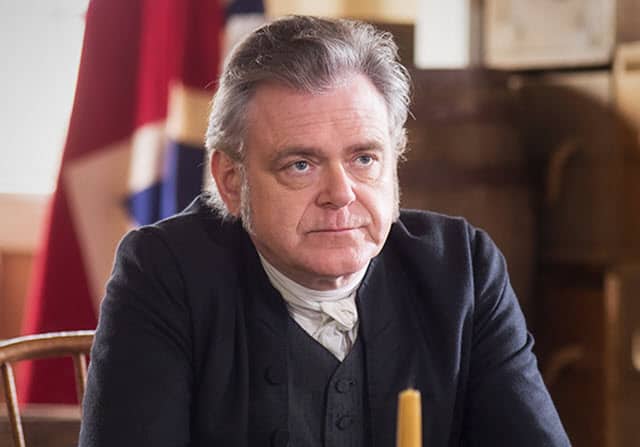 Wow. TurnÂ has had some tense moments in its short run so far, but this ENTIRE episode was full of those moments. Â My heart is still pounding and I have no idea where to begin!! I suppose I have to start somewhere.

A few months have passed since the events of Christmas in which Anna and Abe briefly resumed their “relationship” only to be spotted by Ensign Baker (the soldier living with the Woodhulls) and just as quickly “off-again”. But, what Ensign Baker saw that night would set in motion an entire episode of extremely intense, twisty moments, all thanks to our old pal John Simcoe.

In exposition, Abe is waking up at his home (remember, his wife and child are staying with his father, but Ensign Baker is still living with Abe) to Caleb sitting at his bedside. Caleb teaches Abe about the code that Ben developed with General Washington and gives him a book that explains it. Abe hates his code name (Mr. Culpeper) until he learns that General Washington hand picked it. Of course, Abe can’t actually say “Culpeper” correctly and instead says “Culper”, which I can only assume is a nod to the “Culper ring” book on which this show is based. I haven’t read the book (the show is much more exciting that way) but I recognized the similarity last week.

Meanwhile, Anna pleads her case (as she does weekly) for Selah(her husband)’s release. Of course she is denied by Judge Woodhull, at first, but her request carries weight with Major Hewlett, so it is being more heavily considered. As Anna returns, Abe visits her to convince her to go to New York with him to sell their (The Strong’s) crop. While he’s there, a British soldier arrives with a gift for Abigail’s son (who was left with Anna, while Abigail went to serve John Andre). It was a hat that she made, but it carried a message inside, which the boy turned over to Anna. Big news: Simcoe is returning to Setauket on Monday!! It’s big, scary news for Anna (who is understandably creeped out by the guy) but even bigger news for Abe, who was under the impression that Simcoe is dead! Anna! You got some ‘splainin to do!!

As I previously stated, most of the tension in this episode stems from John Simcoe’s return to Setauket. He reports to Major Hewlett about having a spy in their midst, and wants to investigate the Tallmadge and Brewster families. Hewlett agrees, but makes sure to alert Simcoe that they plan on playing a cleaner game than before. Doesn’t really seem like that’s going to mesh with Simcoe’s personality though, does it?

Simcoe heads to Abe’s residence to make amends, but then he overhears Ensign Baker confessing to Mary that Anna had been to visit Abe over Christmas while she was at the Judge’s. Â Unfortunately (for everyone), Simcoe overhears and demands that Ensign Baker tell him what he saw. Simcoe, being the complete, Anna-loving psychopath that he is, assumes that Abe forced himself on her and takes a gang of bullies to beat him up in the woods. Of course, feeling guilty about the whole thing, Ensign Baker steps in to save the day. Make that 2 British soldier characters I like so far. Ensign Baker seems like a good dude.

Abe brings Simcoe before his father and the Major to resolve the dispute. After everything is out in the open (including what Ensign Baker saw at Christmas), Major Hewlett demands that the two shake hands and all will be resolved in the eyes of the law. Abe is resistant, but Simcoe gets him out of earshot from everyone and challenges him to a duel to settle it. Abe accepts and they shake, just in time for Judge and Major to see. I actually wrote in my notes “this can’t end well”. Simcoe decides to visit Anna to tell her that he’s going to “take care of” anyone who might want to ruin her honor, and gives her the time and place of the duel. Anna is then forced to turn to Judge Woodhull to save Abe’s life.

The day of the duel was by far the most intense scene that Turn has put forth yet. It pits two men who clearly hate each other into a formal setting in which they are legally allowed to shoot at each other, one at a time. Why aren’t we still allowed to do this? Anyway, Abe wins the coin toss (yes, the coin toss) and gets to shoot first, but Simcoe winks at him as he’s about to take the shot (jerk) and he misses. Then Simcoe gets his shot, but before he can get it off, Anna and Judge Woodhull show up. Anna is able to successfully use her womanly charms to convince Simcoe to shoot off to the side, but the Abe demands that the duel continue. Abe’s gun is reloaded, and he points it at Simcoe, while his father screams and begs for him not to do this. “Think of your son”, Judge Woodhull proclaims. You can see Abe considering what becomes of his son, Ben, Caleb, and everyone that he cares for if he goes through with it, and alas he does not go through with it. Â I personally wanted to see Abe take down old Simcoe, but our favorite psycho lives to fight another day. Seriously, though, the episode-long bout between Abe and Simcoe was very intense, and it was my favorite part of the series thus far. Of course, I was mad that Abe didn’t kill him, but at very least we don’t have to wonder if the show will remain intense. As long as Simcoe is alive, it will.

The other plot working its way through the episode was Captain Rogers searching for Ben Tallmadge’s brother. They find the correct ship, only to find out that Samuel Tallmadge is dead. What they do find, however, is his “bunkmate”, whom Jordan identifies as Selah Strong! Plot twist! Capt. Rogers promises Selah that he can get out of there (for all the information he has given them) and they then set a trap for Ben, sending a letter saying his brother is alive. Unfortunately for that plan, Rogers has no clue that Ben has been promoted and must stay with Washington, so Ben sends Caleb to pick up “Samuel” who isn’t really alive. I can only imagine the tension created by both sides in this situation, come next episode, of course.

Selah Strong’s release IS granted, not because of Rogers, but because of Judge Woodhull who heeded Mary’s request, as she was tired of competing with Anna Strong for her husband’s time. Abe and Anna go together to pick up Selah at the end of the episode, and of course Anna says Abe should’ve shot Simcoe. Sometimes, with women, you just can’t win. Abraham Woodhull learned this lesson almost 250 years ago and we men are still learning it today.

Acting superlative this week was tough. Samuel Roukin (Simcoe) and Jamie Bell (Abe) are good every week, so this week I’m going to have to go with relative newcomer Thomas Keegan, who plays Ensign Baker. Ensign Baker has had a relatively small role to play in the show thus far. In fact, I have previously referred to him only as “the soldier quartered in Abe’s house.” This week, however, Keegan really stepped up into the spotlight, since the major plot devices hinged on information only he had. But Keegan also shows Ensign Baker as a human who clearly cares for Abe and his family. Well done, TK. Hope to see more of Ensign Baker!!

Well that about covers this week’s episode. What did you think? Sound off in the comments. Only three more weeks of this exciting bit of history!