I’ll be the first to admit that when the start of The CW’s revamped 90210 introduced the new character of Teddy Montgomery to the cast, I had some serious reservations about him. The guy was toooo squeaky clean and the kids of West Beverly warmed up to him quickly. A little too quickly for rebel Silver (Jessica Stroup) and myself. But little did the both of us know, Teddy would eventually win us over as well as other fans of the show.

So imagine me having a phone conversation with Trevor Donovan, the guy who gives us Teddy every Tuesday on The CW, and talking about how his character went from being a troublemaker (he broke up Navid and Adrianna) to a guy who we would eventually root for and actually care about. If you need help, imagine a super geek walking on the set of a Star Trek show, but bring it down a few decibels.

One of the topics discussed, as I mentioned above, was the elevation of his character since the beginning of the season. “It’s been a journey. I won’t lie to you!” Trevor recalled. “I didn’t know what direction the character was going in, but I tell you what, especially with the last episode coming up in the season, the writers and producers knew exactly what they were doing.”

Intrigued, I dug for more, especially about what’s coming up for Trevor in the long run, which includes the introduction of his movie star father, Spence Montgomery, played by Ryan O’Neil.

“You’re going to see a different side of Teddy when his father comes into play… He [Teddy’s father] will bring another layer, another dynamic to Teddy and you will see why Teddy is the way he is.”

More layers and more back story equals more Teddy, which I hope means more of Tilver (or Seddy), who hit a snag in last week’s episode of the show. But according to Trevor, we have nothing to worry about. “Teddy is changing his ways, but has a past that tends to catch up with him and bite him in the ass, but it will all work out.” Whew! Then I had to ask my man how is it kissing Jessica Stroup.

And whether or not he will cross paths with Jasper’s (Zachary Ray Sherman) crazy ass, Trevor didn’t want to give away the goods. 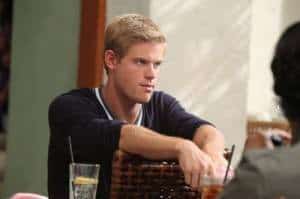 “I don’t want to give up too much!” he chuckles. “Jasper does more damage to himself than he will anyone else so there is no need for me to step in.” Thank GOD!

But the one thing that Trevor kept alluding to was the season finale, which has gotten so much buzz around it that it might be one of the top finales to watch this year, especially with it finally giving us a solution of the Annie “hit and run” plot that has dominated this season. Will Teddy be involved in one of the storylines? “I am definitely involved in one of the cliffhangers.” And that’s all he gave me on that one people, adding that the finale will be “intense.”

All in all, Trevor was pretty laid back during the entire interview, which was a sharp contrast to me, but we won’t get into that. Here’s hoping that Teddy/Trevor makes it to Season Three, which premieres this fall on The CW.

You can catch new episodes non-stop till the May finale Tuesdays @ 8/7c on The CW.