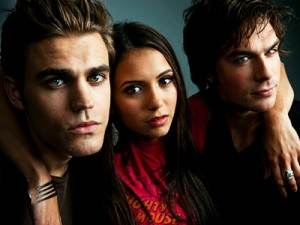 I think the appropriate subtitle for this article is: the day Clarissa opened up a can of worms that was better left closed. Mostly because I’ve seen how passionate Twilight fans can be. Are Vampire Diaries fans as passionate?

I would like to begin by saying that I have read each and every Twilight book, as well as the entire Vampire Diaries series. I also saw the first Twilight movie and have religiously followed the Vampire Diaries episodes each week. In fact, I love them (TVD, that is…..). This article is meant to be a comparison between the two series on a variety of factors that they both share, not necessarily an attack on one or the other.

I simply cannot say this enough times: vampires should not sparkle in the sun. The fact that the Twilight vampires do is an out (since Meyer chose to have her characters live in a perpetually cloudy town) and removes the danger factor. Vampires are DANGEROUS. They kill people and suck their blood. So when Edward walks into the sun and gets all shiny I simply cannot take him seriously. I don’t care if he can stop a fast-moving van with his bare hands. He shouldn’t twinkle like Christmas lights.

“Oh, but the Vampire Diaries vampires have rings that protect them from the sun”, some of you will argue. “Isn’t that an easy out?” Yes, it is. But so far only Damon and Stefan have these magical rings, so if other vampires show up (and presumably they will) there’s no guarantee that they will have the same protection, which still allows for potential danger. It’s a plot device, but it’s still better than sparkling.

How I long for the Buffy days when the vampires only came out at night. What was so wrong with that? It featured high school students too. It’s like they’re trying to make vampires into these ridiculously pretty boyfriends instead of the evil undead. The sparkle thing just tramples on great historical vampire literature (like Bram Stoker’s “Dracula”), when vampires feared the sun.

You know how hot the vampires are in both series? They’re HOT (more Paul Wesley with no shirt, please!). With bodies built for sin. So the fact that the sex quotient in Twilight is so low is kind of ridiculous. Yes, I understand that Stephanie Meyer is a Mormon and doesn’t believe in sex before marriage and that’s perfectly fine, but there’s a reason that shows like True Blood are so popular. The vampires there are hot and passionate and sensual. Which is what vampires are supposed to be. They don’t kiss their girlfriends chastely on the cheek.

And please do not talk to me about the sex scene in Breaking Dawn. I don’t want to discuss broken headboards and ripped pillowcases as proof of Twilight sensuality. It’s difficult, of course, to compare either Twilight or TVD to True Blood, because True Blood is very adult-oriented, whereas the other two are more focused on teens and girls in their early 20s, but I think there’s still something to be said for the comparison.

ADDED: I didn’t think about this until the morning after I posted the article, but from what I recall, there isn’t a lot of vampire feeding or exchange of blood in Twilight. A lot of people have likened vampire feeding to a pseudo-sexual act (and I agree with this), so I wonder if that was a deliberate slight by Meyer because of the lack of sex in Twilight, particularly the first three books.

I’m almost afraid to write this, but I feel the Salvatore brothers are much more interesting characters than Edward. RELAX. I’m not saying anything about Robert Pattinson and his portrayal of Edward, I’m talking about the characters. In the books Edward always struck me as rather bland. Oh, he’s so tortured, isn’t he? So tortured and so in love and a bit of a hero and one-dimensional. You could probably say the same about Stefan on The Vampire Diaries, but Damon (played to perfection by Ian Somerhalder) is so delightfully wicked that he makes up for that.

I think that Stefan has potential to become something more than just a brooding hero who’s in love with a human girl. If they stick close to the books, he might remain a bit one-dimensional, but if they deviate a bit (which they have done), then they can give Stefan a purpose beyond the tortured leading man who resents his current state as a vampire. Angel showed that you can have a brooding vampire who hates what he’s become and still be a complex character. 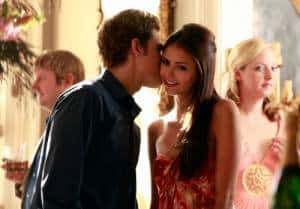 A lot of people have bashed on the Bella characterization in Twilight. Many people have talked about how she’s weak and really exists for no purpose but to love Edward. I personally don’t have a much better opinion of her. I think it’s wrong for young women to idolize a character like Bella (and I say this as a woman). There is absolutely nothing wrong with love, but the Bella-Edward story takes it to a whole new tragic level that is not particularly healthy. And why does Bella have to fall down so much? I’m a klutz too but I can generally get around.

Elena as portrayed in the Vampire Diaries books is a lot different than the Elena on the show. In the books she was very selfish and superficial. Completely different from Bella. In the series she’s more grounded and less concerned with popularity. And, frankly, she’s a much stronger girl and character. In the most recent episode she told Stefan that she couldn’t be with him because he was a vampire and had all sorts of vampire problems. Yes, we ALL know that she’s going to go back to him, but at least she wasn’t as blindly accepting. And she fights back. She was horrified to learn that Stefan was a vampire. She wasn’t just saying “Oh, neat! Can we make out?” Elena is no Buffy, but she’s not a tragic heroine. And, frankly, I’m digging her alter-ego (Katherine) in the show. She’s definitely got a mean streak that I want to learn more about.

Yes, I’m mentioning Buffy a lot, but Twilight, the Vampire Diaries and the vampire genre in general owes a lot to that show. It showed that the vampire genre can combine elements of drama and comedy (and musicals!). So, as Buffy liked to say: “I like my evil like I like my men….evil!”

The danger factor in Twilight is not big. There’s always soooo much build up in the books and then very little payoff (especially in the last one, where I can’t recall if anyone important even died despite the fact that Renesmee was supposed to start some sort of clash of civilizations just by being born – in fact, I think there was a face-off in a field without bloodshed, but I could be wrong, so tell me if I am). Frankly, the first Twilight movie did a much better job of portraying the ‘James wants to kill Bella situation’ than the book did. The fight in the ballet studio was kind of cool. But there’s just so much talk in the Twilight books. Even the Volturi don’t feel that dangerous (maybe it’s the hair?) 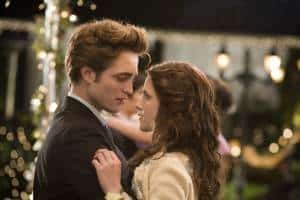 I like how Damon kills without regard in the Vampire Diaries. I love how he isn’t conflicted at all about murder and revels in his evilness. I want even more danger. I want people to die. This is not me being sick. But vampires have been portrayed as evil for a reason. They’re not teddy bears. At the same time, Damon is capable of love, which is always an interesting twist.

There are more opposing forces in the Twilight series: the vampires versus werewolves scenario. But even then….even with the whole “vampires and werewolves will NEVER be friends”, there’s still a truce. Despite some near misses, the deep-seated hatred between the two clans is focused more on Edward and Jacob’s fight over Bella than any real examination of conflict. Again, that potential gem really goes nowhere. And ends with Jacob imprinting on a vampire’s daughter. A baby daughter. Kind of pervy.

My friend Lanford had this to say when I told her I was writing this article: “Bonus to Twilight – Taylor Lautner’s sick (underage) body. Damn, kid.”

Yes, truer words were never spoken. Points to Twilight for that.

There will be a lot of people who disagree with this post and that’s fine. We all don’t have to like everything. Obviously people like Twilight. I’m more than happy to hear your arguments about the above factors or others. But making a comment about how “Edward is hot” is not going to advance anything (because I will childishly counter with the fact that both Stefan and Damon are hot too, so nah, nah, nah). I’m happy to be proven wrong or to listen to the other side of the argument. Also, I’m not hating on Robert Pattinson and/or Kristen Stewart. Nor do I have any particular opinion about their possible/definite relationship. That’s not the point of this article.

A lot of people have asked me why I didn’t talk more about Anne Rice and True Blood in this article and the reason for that is two-fold: (1) I honestly haven’t read much Anne Rice beyond Interview with the Vampire and that was very long ago. I didn’t want to start making assumptions about her work and comparing it to others that I was much more familiar with. However, I will say that I believe Anne Rice created very complex and interesting vampire characters and had a big impact on the genre in general. (2) I don’t make many comparisons between Twilight and True Blood because I really feel that True Blood is a much more adult story than Twilight (or even TVD). Furthermore, True Blood is much more mystical. In that sense, it has more in common with Buffy than with either Twillight or TVD. I love True Blood, so the slight isn’t meant to exclude it, I just don’t think that it’s necessarily meant to target the same audience or deal with the same themes.