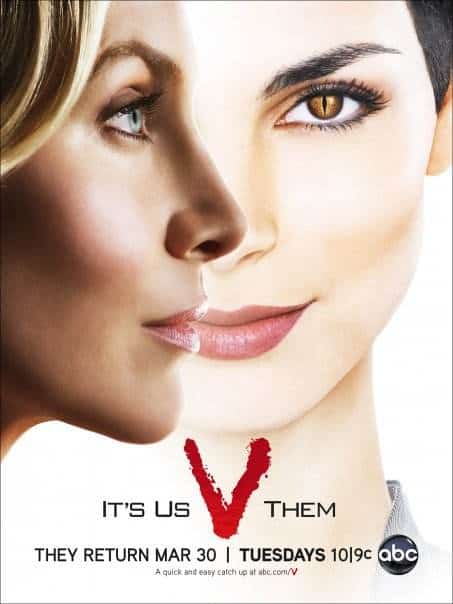 V returns on March 30, and it’s about time it did. ABC’s two best new shows (FlashForward‘s the other one) have been on hiatus for too long, and I’m glad we’re finally closing in on V‘s return, when we’ll hopefully get to see a sci-fi television juggernaut: LOST and V on Tuesday nights. If anything, we can only expect V‘s viewership to improve with the pairing.

But ABC’s not relying on that pairing alone to advertise the series’ return. Already, new promotional posters have been released through the show’s Facebook page, and they’re both pretty awesome. Both posters feature Monica Baccarin and Elizabeth Mitchell (Anna and Erica, respectively). Both look fairly bemused, and it’s a great look at the power struggle between the two leads of the series.

Speaking of which, it’s great that the posters show off the strong females on television. Aside from the short lived Terminator: The Sarah Connor Chronicles, it’s hard enough to find two strong female leads on a science-fiction show, and I’m glad that V is showing off the feminine side to sci-fi. If this campaign is even partially successful with its target demographics (which are just about everyone), it might just guarantee V at least one more season – and, by extension, guarantee the survival of sci-fi television for at least another year.

In the meantime, oogle these posters, which are posted to the left and right, if you didn’t already notice (click on them to see the full versions). V will return with its fifth episode on March 30. If you missed any of the first four episodes, they’re available online for you to catch up on.