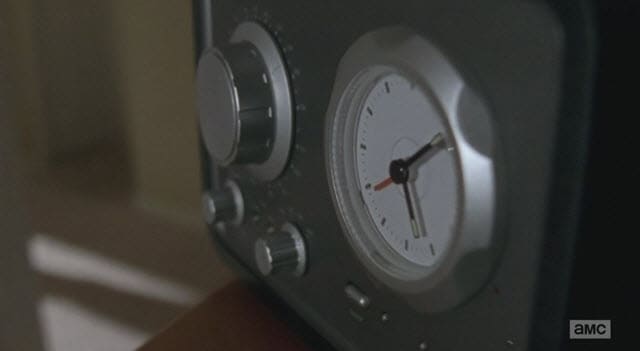 Let’s get this out of the way first, any article about last night’s The Walking Dead is going to be chock full of spoilers, considering the entire point of the episode was all about the slow death of a long-running character. So turn back now if you haven’t seen it.

Tyreese is no more, and I think he was given one of the most well-made, heartfelt send-offs that the show has ever seen. I disagree with the notion that his death was “stupid” or “anti-climactic.” Not every character death has to be some epic disaster or act of self-sacrifice. Tyreese was bitten by a child, and then spent the rest of the episode wrestling with his demons. I loved it.

One of those demons? Not any of the past dead cast members who appeared to guide him (for better or worse) into the afterlife, but that creepy radio broadcast that kept coming on. There are a couple theories about just what that was all about, and I think both of them are interesting enough to share here.

Two facts are clear about the broadcast before the theories diverge. The first is that Tyreese was hallucinating, recalling the bad news on the radio he heard as a boy with his father. The second is that the broadcast appears to be narrated by Andrew Lincoln, who as you may have forgotten, is actually English. Pretty cool.

But now the interpretation splits. First, read the full transcript of the broadcasts:

“At least 68 citizens of the republic have been killed in four deadly attacks along the main coastal district. The group has continued their campaign of random violence, moving across the countryside unfettered with the republic’s military forces in disarray.

…then terrorizing the village by night, carrying out revenge attacks involving hacking innocents with machetes and, in some cases, setting them on fire.

There have been troubling reports of cannibalism having broken out in refugee camps along the republic’s transportation corridor. And despite the string of victories by rebel forces, there are disturbing reports of increasing the brutality of their tactics including the wholesale destruction of villages, burning down local prisons, targeting of civilians, and even the widespread mutilation of children and young mothers. And this seems like only the beginning of their campaign that they label as an endless war against…” 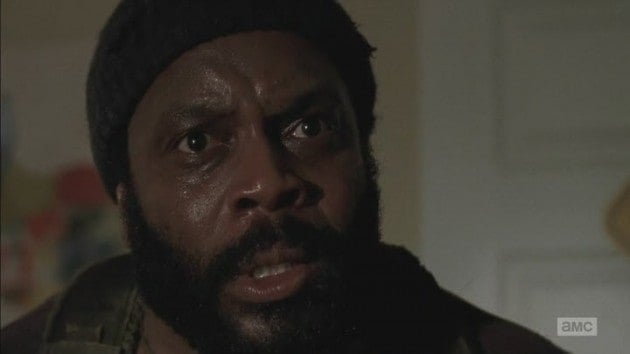 The first theory is that almost all of the events here correspond to the journey of the group on the show, only with the Republic and Rebels standing in for the actual parties. “Terrorizing the village by night with machete attacks” corresponds to the Woodbury raids. Cannibalism is a reference to Terminus, and burning prisons is obvious. Past that, mutilation of children may be what Tyreese endured with Lizzie and Mika in the Grove, though I can’t figure out the “young mothers” part. That could be Beth, given her caretaker role with Judith, but I’m not sure.

The interesting aspect of all of this is that the actions of the group are interpreted as evil, that they’re “terrorists” going against the order of the Republic. The idea here is that perhaps this is how Tyreese has viewed the actions of the group, with their incessant need to commit violence. Or perhaps it was just a different way of looking at the situation.

The second theory is that the broadcast is about the Rwandan genocide, which contained a whole host of machete attacks against innocents, and widespread destruction of villages. I could only find articles about prisons burning in Rwanda recently, and only one or two isolated stories of cannibalism in the country ever, however. This makes sense, because it could have been something Tyreese listened to on a radio when he was younger. And past that, there’s one last piece that makes this fit. From a news article about the genocide:

“They are the survivors of a horror they will never manage to forget – those the Rwandans call “bapfuye buhagazi” or “the walking dead.”

That seems too close to be a coincidence. Perhaps some blending of the two is the answer. However, no matter the case, I thought it was far and away one of the most interesting touches of the episode, and I hope the show starts to do more things like it.

Farewell, Tyreese. I think they gave you a fine send-off.