Home
TV News
‘Undercovers’ Declassified – No Mythology. So What? 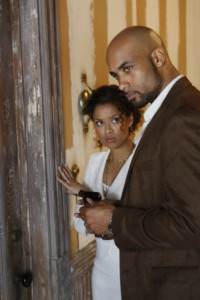 As the premiere of Undercovers came upon us this week, plenty of reviews for the new J.J. Abrams spy drama had one united complaint: no Abrams-esque mythology/overall arc.

My summation of that claim: So. What?!

Now, let me get two things straight here before I begin. #1 – I don’t consider myself an Abrams ‘fanboy’, just a big fan. I have only seen season one of Alias (albeit, a long time ago). I consider LOST (which I am a fan of) as we know it now as being mostly Damon Lindelof and Carlton Cuse’s endeavor since Abrams left earlier in the show’s run, before the mythology became more apparent. LOVE Fringe. Loved Star Trek and Cloverfield. In short, I know and understand Abrams’s tricks and tropes. #2 – I am a big fan of mythology within a genre show, I just don’t need it with everything I watch on TV.

With that being said, I feel that just because Abrams is part of the creative team behind Undercovers that it is not a requirement for there to be an overall mystery to maintain the attention of his audience or to make Undercovers must see TV. Mythology is cool… when it is warranted. While Undercovers is fodder for a super massive conspiracy of global proportions, the heart of the show (at the moment) is on the relationship of the Blooms, which I hope can be established before all eyes turn to a cultish mythology, which can steal the Blooms’ dynamic thunder.

While the pilot for Undercovers left us with little to be desired, the show still has plenty of opportunity to expand upon the backgrounds of Steven and Samantha’s private careers in the spy game. They obviously don’t know each other the way they thought they did, which can lead to plenty of drama down the line. Then you have to throw in the fact that there are two different pilots out there, one of which didn’t include the scene with Carlton Shaw answering his superior’s question if the Blooms knew the real reason behind their reinstatement. I can’t help but wonder if that scene was included in the pilot that was sent out this summer, would many of the reviewers still be voicing dissent at a J.J. Abrams project without a long term mystery.

In my review for Undercovers, I welcomed whichever route Abrams and Josh Riems decided to take with the overall storytelling of Undercovers, whether it included mythology or not. The point I’m trying to make is that it’s pretty unfair to not give the show a chance, because Abrams decided to go a different route this time around; especially after fans/critics complained about the directions some of his mythological laden shows took in their later years. In light of this, while some call the premise of Undercovers “safe”, I call it ‘smart’, especially this early in the game.

So I leave with these questions? Do you think Undercovers could use a mythology in the show or not? If so, do you think it should come now or slowly revealed over time? Or do you think mythological laden shows are overrated?