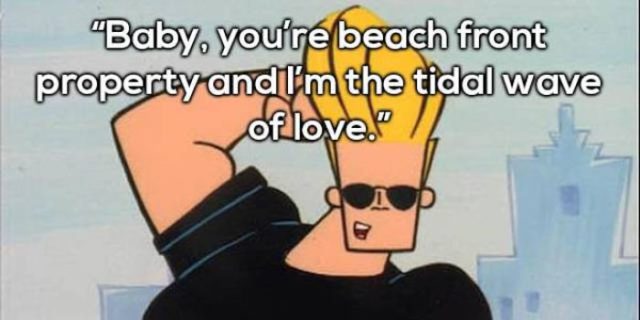 Anyone remember Johnny Bravo? Yeah? He was the big blond beefcake on Cartoon Network that thought he was all that and a bag of chips. Of course he didn’t know what that meant until one episode when he was trying to get with a woman that was into hip hop and he knew nothing about it. But that was part of what Johnny was all about, being buff, looking good, and impressing the ladies. If he’d been real of course he would have been enormous and no doubt quite handsome with a pompadour that Elvis would have been jealous of. Yet for all that he was kind of an arrogant, conceited jerk as well.

If you don’t believe me look at some of his pickup lines. 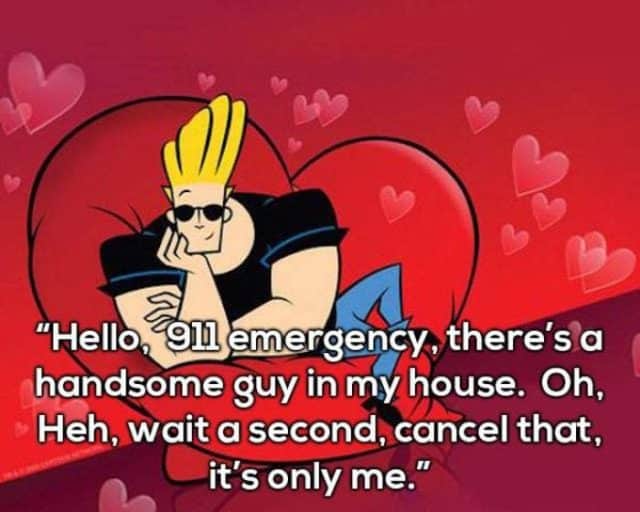 Only Johnny would call 911 to tell them that he’s looking in the mirror. Oy. 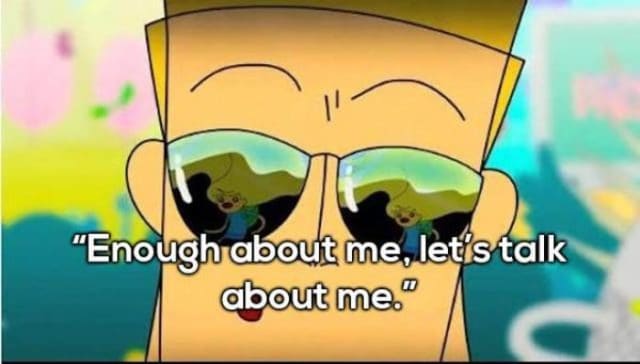 He almost sounds like Toby Keith with this line. 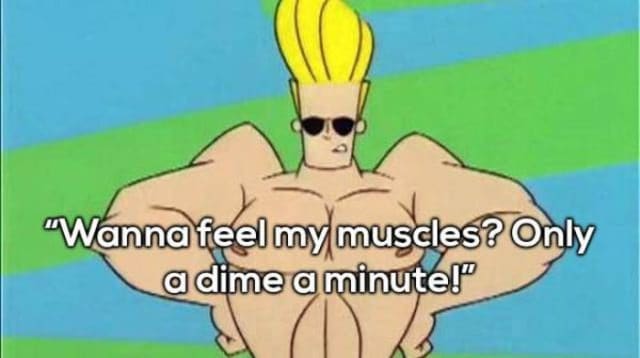 That’s okay, you can pet the chihuahua down the street for free. 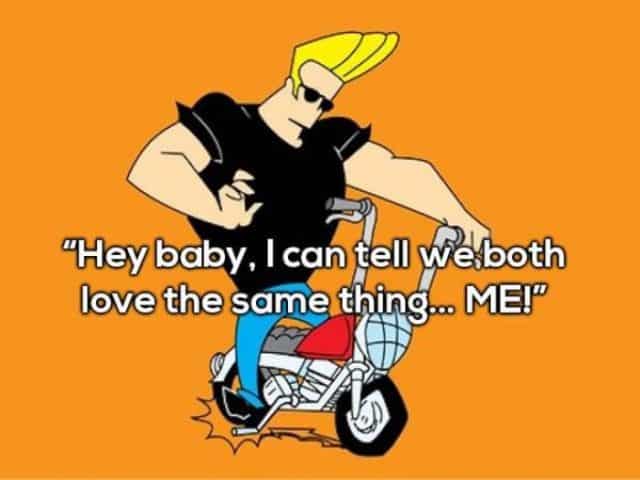 Ever wonder why Johnny didn’t get a lot of play in the cartoons? It wasn’t because women found him too appealing. 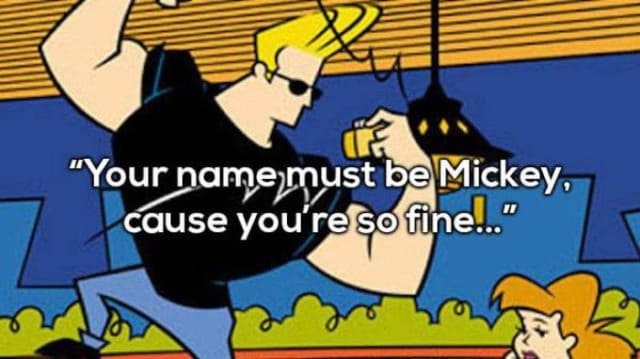 A pop reference, how quaint. Notice the lady on the right doesn’t look too terribly impressed. 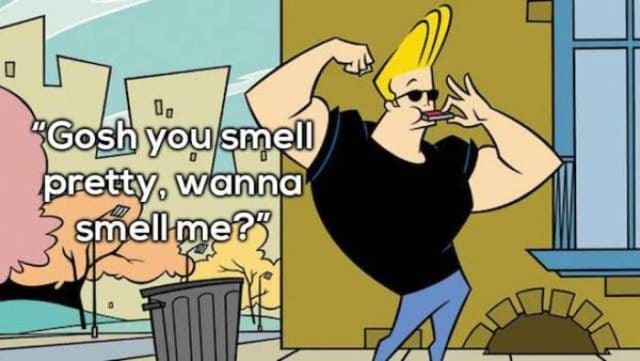 I’m guessing a lot of hair gel and bad cologne that’ll burn off all the nose hairs in your nostrils. But hey, I’m just guessing. 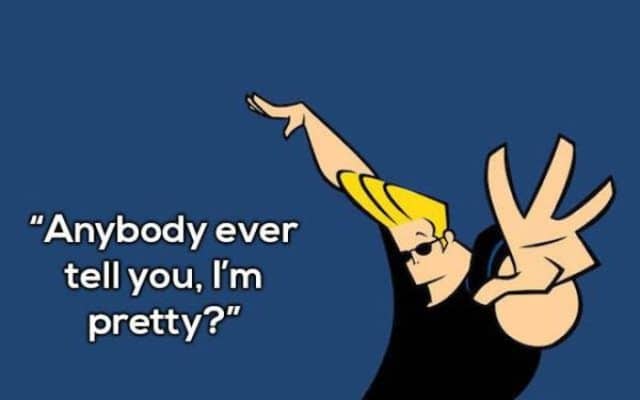 Nope, I can come up with a lot of other adjectives but I’m fairly certain “pretty” isn’t one of them. 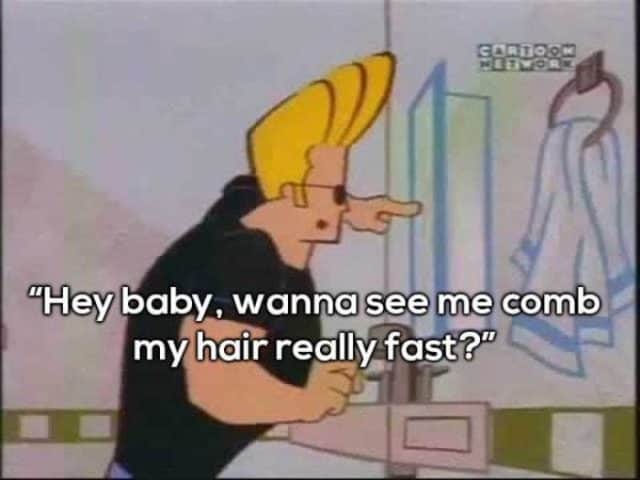 There’s something else we’d like to see you do real fast, and it involves fading out. 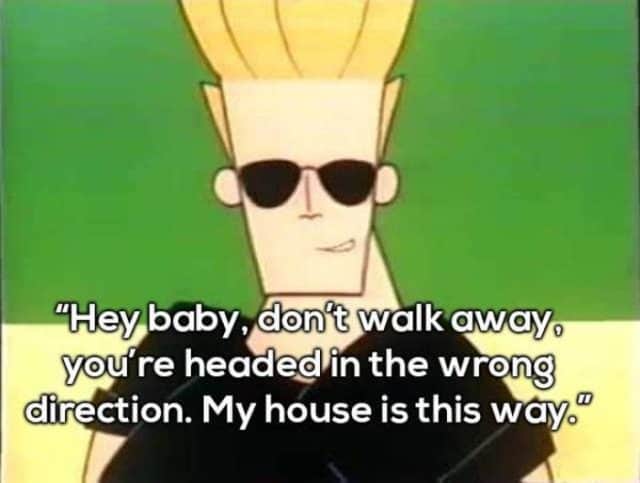 Actually that could be the argument that she’s headed in the RIGHT direction, so long as it’s not a winding road to your front porch. 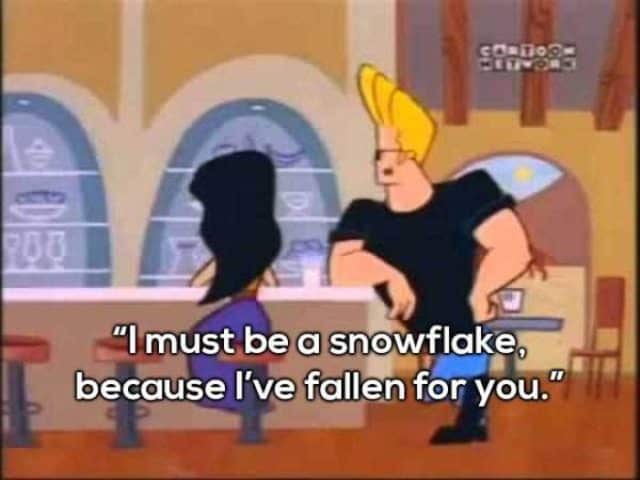 You might also be a snowflake because you tend to get your butt kicked by women that have rejected you and don’t like being hit on continuously. 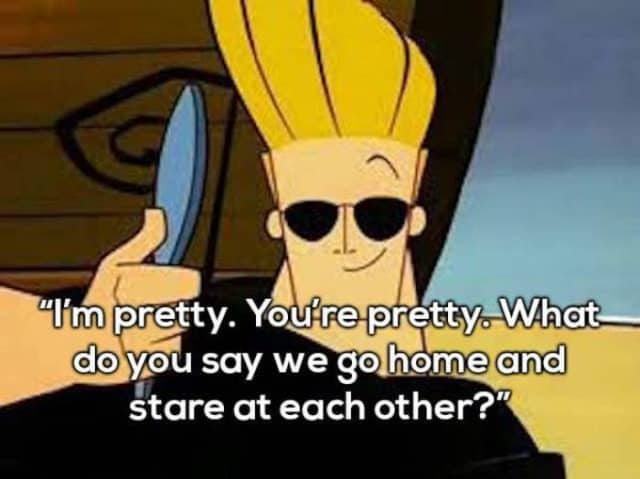 I’m staring at you now and I can say in good faith that I’ve had enough. 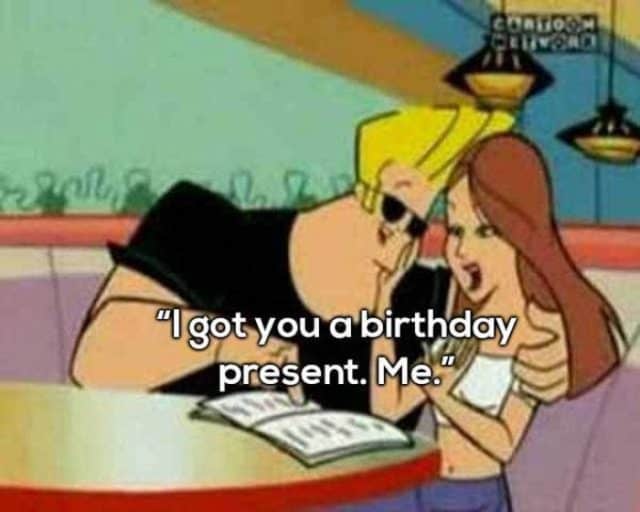 That’s a big tsunami of hair just waiting to drop on a poor, unsuspecting lady. 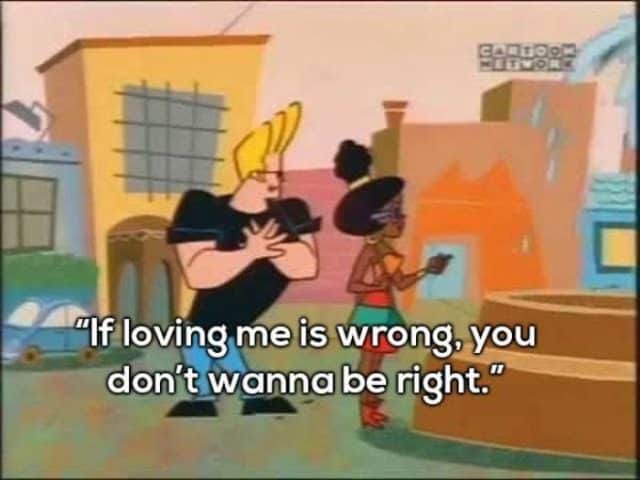 And yet she continues to be wrong. Wise woman. 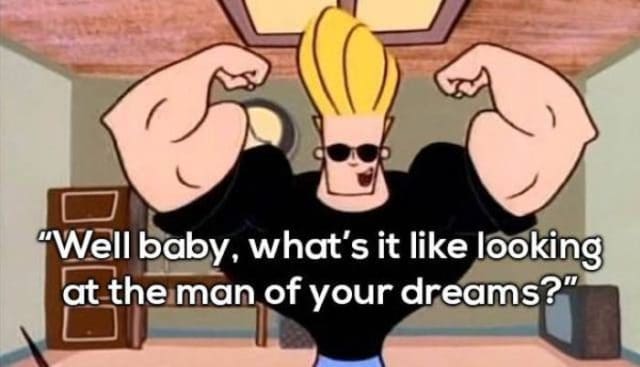 Let me find him and I’ll tell you. 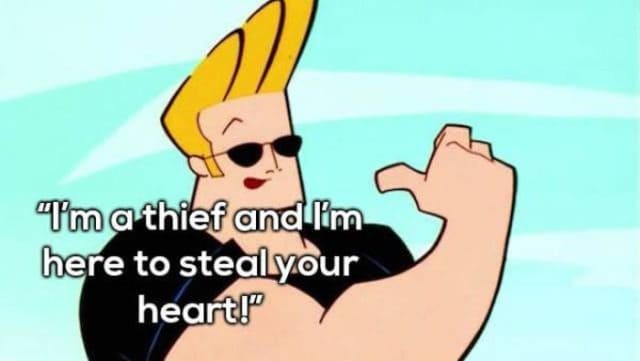 Thanks for letting me know. Wait right here and let me get my 12-gauge thief deterrent. 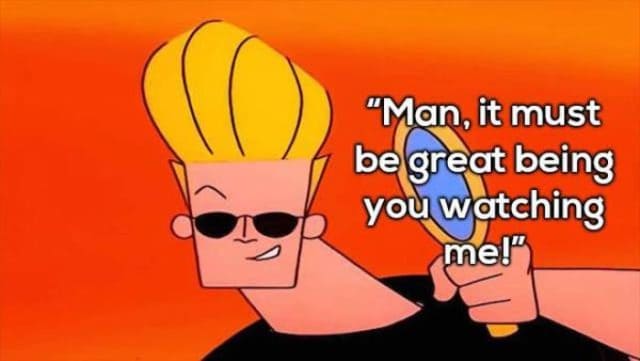 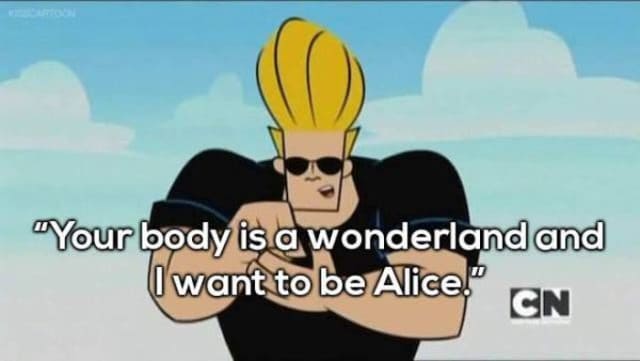 Well then, let’s move straight to the “off with your head” scene. 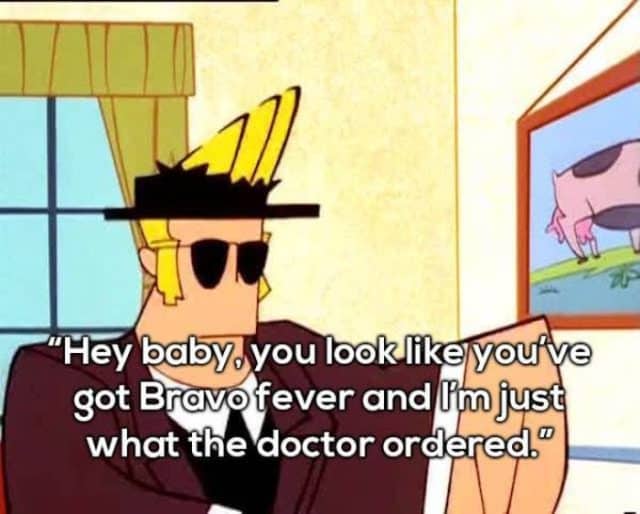 Someone got the shipment wrong then. I’d like a refund. 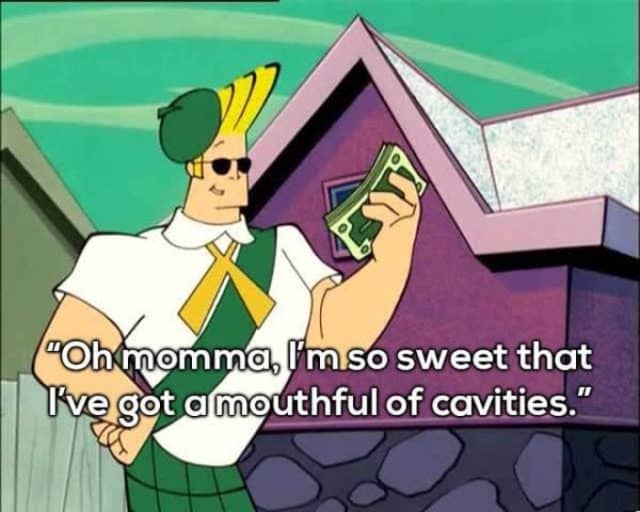 I’ll let the dentist know to use his biggest drill.

See? Johnny’s pickup lines can still be a lot of fun especially when you decide to interpret them in your own manner and give an honest response. Johnny Bravo had his funny moments during his run but quite honestly he was one of the more suspect characters that was created as a stereotype that never really took off. He had his run but to be quite honest he’s about as entertaining now as the 1970’s.