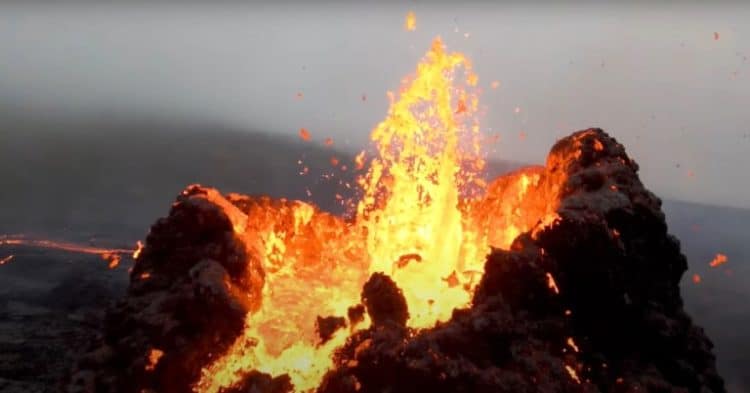 A lot of people might think that flying a drone that costs in excess of a thousand dollars through a volcanic eruption might not be a good idea, but the owner of this particular drone didn’t think it would be a big deal, even though it does appear that the drone almost got doused with liquid hot magma. Just imagine if the spew had been a little higher, this footage would have ended very quickly. But the owner of the drone is right, it is an impressive picture and it does have a great camera, good enough that it’s capable of showing just how close to disaster it came when doing the flyover. There are some folks that don’t mind being close to the burning hot mass that bubbles up from below the earth at times, as the idea appears to be that unless it’s being flung violently into the air that it’s not that big of a deal. In fact, those that measure such activity are often seen standing near cauldrons that are spewing magma slowly but steadily from their interior, coating the landscape around them with the burning, orange-hued material that has actually been vital to the building of landmasses for some time now. The destruction aspect is something that people would rather do without, but one has to remember that sometimes destruction does give way to new life, though as humans we do have trouble seeing that since the process is a bit longer and much more destructive than we’d like.

Lava flows that are a little less violent and don’t endanger as many people as this one are sites that many people can’t help but be mesmerized by at times, as the bubbling and churning is kind of hypnotic in a way. Some people would think this is a nutty way to believe, but the primal forces that run this world are often easy to be entranced by since there’s a quality to them that speaks to people in a way that many don’t want to admit to. The practical side of humanity says this is hot, it’s dangerous, and it’s destructive, so therefore it’s wise to keep our distance and not get too close. The other side says that it’s beautiful in its own way and definitely interesting since as a part of our world that we don’t get to interact with that often, it’s something that represents more than destruction. But usually, as one might guess, the practical side wins out, especially when it comes to the fact that getting too close isn’t exactly conducive to one’s good health. Therefore, drone flights are actually a decent way to monitor this type of activity, and if there’s a way to take measurements and run other tests via drone, one can bet that it might be something that will happen.

As one of the more destructive forces of nature, lava is by far one of the things that people know to stay away from. But as something that’s a part of this world that can affect other parts of the world, it’s also something that has to be monitored and gauged from time to time as far as where it will spread, what kind of damage it will do, and if such a thing can be prevented or predicted in time to avoid any casualties. Those that learn what they can about such things as volcanic activity tend to learn several disturbing things that might happen if the right kind of circumstances emerge, such as supervolcanoes and what might happen if the famed Ring of Fire that’s located around the Pacific Ocean decides to fire off all at once. While it might not be an extinction-level event, it’s believed that it would kill thousands, if not millions, as the rain of ash and debris would darken the skies and make life difficult to impossible within the affected areas. But this is why people study and remain as ready as they can in case something catastrophic does end up happening. There’s not a lot that can be done to keep it from happening, but the warning that people would need to hopefully get out of the path of such destruction is a big part of the job.

But hovering near a cauldron with a drone that costs so much feels like something that relied on a bit of luck to keep the drone from being fried by a bit of magma that could have easily brought it crashing to the ground. It was a great flyby and a great image, but as always volcanoes are best observed from a distance, particularly if they’re active. While this isn’t exactly a massive volcano opening it doesn’t really need to be since it only takes one errant splash of magma to destroy a piece of technology.