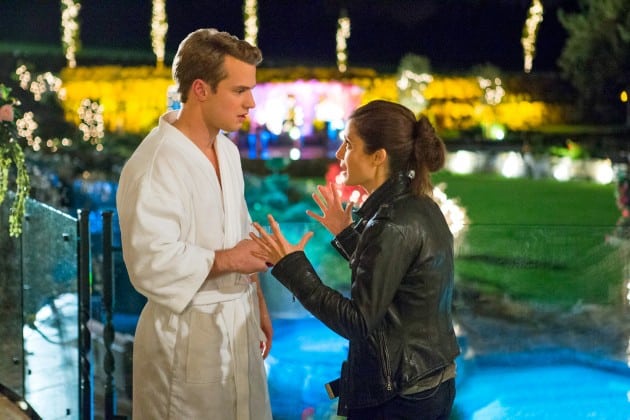 When “Two” begins, it appearsÂ Everlasting (andÂ UnREAL) is recovering nicely from Mary’s death, on both sides of the cameras. Chet and Quinn can finally be together, the four remaining girls are ready Â to move on from Mary’s death, andÂ EverlastingÂ is about to get real spicy during its spa day episode, setting everything on track for a smooth ride to the finale. Yet, the more people smile and nod throughout “Two,” the more it turns into a twisted little play where, by the end, we’re all (both character and audience) waiting for the shoe to drop in a major, unpleasant way.

“Two” is an expert course in building tension; Chet’s grinning face alone is enough to suggest all is not well in the Kingdom of Love. He’s not the type to run around helping people out and passing along important, very weirdly delivered lessons on power and control; he’s a dominating type, the kind of guy who puts a ring on a girl he’s been having an affair with for the better part of a decade – before his divorce papers are even drafted up, much less signed. Underneath that sheepish grin and fat wallet is a drug addicted, selfish mess, so it’s no surprise Quinn finds him taking advantage of Madison later in the episode, after he learns of her career ambitions. Of all the manipulators working the girls of EverlastingÂ (and the people around it), Chet may be the worst of all, and his behavior in the first thirty minutes of the episode has an ominous feeling, not unlike the way the first act of “Fly” played out a few weeks earlier.

This veneer of happiness spreads across the set. Jeremy breaks up with his girlfriend to get back with Rachel, while Anna and Grace are both presented with the opportunity of marrying Adam and starring in anÂ EverlastingÂ spin-off. Oddly enough, it’s Adam that is the most level-headed through most of the episode, which again is a telling sign of sorts; when Adam becomes the voice of reason on set, something is definitely haywire. That gentle prodding is enough to set the stage for the episode’s final act, in which everything comes loose, neatly conveyed when Chet takes Rachel for a “joyride” in his car. Things are speeding up for UnREAL, and characters are desperately clinging to what control over their lives they have, from the most minor characters like Madison and Jay (who makes a limp exit when Shamiqua gets voted off), to major characters like Rachel and Quinn, who both make drastic choices about their love lives that could have dire consequences for their careers.

Some of these stories feel a little engineered to fall into place, sure, but once Chet drops his happy face and lets the unstable, wealthy animal out, “Two” comes to life as the negotiations forÂ Royal LoveÂ take center stage. After all, it’s all about the money, right – or more accurately, what the promise of all that money can do to some human beings. We’ve already seen how far these characters will go for a profit, and “Two” only pushes them further down that path, putting a dark cloud over the set of the show, and ending without resolution, instead offering a number of heavily allusive images for what is to follow: Jeremy entering Rachel’s empty trailer, Rachel sleepingÂ with Adam, and Quinn throwing Chet’s massive engagement ring into her private safe, removing an ominous flash drive that was stored there previously.

In that sense, “Two” is best personified by poor, ambitious Grace. After the promise of (financial) happiness was offered to her, she allowed herself to be persuaded by the delusions, dropping her “tough” facade from a week earlier and allowing herself to get excited about the future. Of course, nobody told her thatÂ Royal LoveÂ is actually supposed to happen with Anna (and not take place in England, instead at the vineyard Adam’s trying to rebuild), and so she’s left unknowingly waiting for the emotional pianoÂ to drop on her head; her storyline neatly mirrors the rest of the episode surrounding it, a series of cautionary tales about the self-serving pursuit of happiness, and the ripple effect it not only has on others, but our own sense of reality.

“Two” captures those mental contortions perfectly; it’s what leads Rachel to momentarily trust Chet, or how Quinn convinces herself to continue putting on a brave face in front of the man who continues to disrespect her love. The things we do – or convince ourselves to do, no matter how out of character it may be – for what we want can often lead down ugly roads; and howÂ UnREALÂ is using the setting of a reality show (one of the most self-serving things a person can do, especially given the modern construction of “reality” shows) to explore that in human beings makes for a fascinating study in human psychology. Driven by this exploration and heightened by the award-worthy performances at the center of the cast, it’s no surpriseÂ UnREALÂ is wearing the crown of this summer’s best new show.