Home
This Is Us
This is Us: Six Facts You Didn’t Know About Mandy Moore

If you haven’t tuned into the new NBC dramaÂ This is Us,Â you are missing out. The series, which justÂ scored 11 million viewers in its fall finale, has critics and fans laughing and crying. Part of the success of the show is due in part to the excellent chemistry between stars Mandy Moore and Milo Ventimiglia. Mandy Moore is no stranger to the world of television. The actress recently appeared onÂ Red Band SocietyÂ and the animated series High School USA!Â Here are six facts you may not know about theÂ This is UsÂ actress.

Mandy Moore has earned several accolades from her acting career which dates back to the year 2000. She garnered four Teen Choice Awards, 3 of which were from her performance in the 2002 movieÂ A Walk to Remember.Â Moore also received two Young Artist Awards and an MTV Movie Award. She is currently nominated for a People’s Choice Award for her role onÂ This is Us.

In 2005, Mandy Moore added fashion designer to her resume. TheÂ This is Us actress ventured into the world of fashion because she wanted to provide clothing for taller women as she stands 5’10” tall. The clothing line was called Mblem and featured cashmere and knitwear. Moore shut down the line four years later in 2009.

Mandy Moore launched her music career in 1999 with the hit singleÂ Candy. InÂ order to promote her upcoming album, Moore toured with pop group NSYNC during the summer. After the release of her single, Moore would tour with another popular boy band: The Backstreet Boys. The single would receive a Gold certification. Moore still sings and herÂ This is Us character is an aspiring singer.

Though Mandy Moore is generally bright and positive in interviews promotingÂ This is Us,Â the actress has battled depression in the past. In 2007, Moore ended her relationship withÂ ScrubsÂ star Zach Braff. The actress admitted, “I’m a very positive person. So it was like someone flipped a switch in me. The breakup added to what I was going through, but it’s not the complete reason. It definitely doesn’t help if you’re already in that place.”

Mandy Moore has a special tattoo that she got when she toured with her band. The tattoo is of a small sperm swimming on her ankle. DuringÂ a recent interview on Late Night with Seth Meyers,Â the This is UsÂ actress explained the background behind it.Â Apparently, all of Moore’s male band mates had to share a hotel room when touring. They had one rule that none of them were allowed to pleasure themselves in the shower. Once the tour ended everyone got the same tattoo.

The Summer of 2007 was all about Rihanna and her songÂ Umbrella.Â Mandy Moore loved the song so much that she recorded an alternate version of the hit single. You can check out the video below:

Do you enjoy watchingÂ Mandy Moore on This is Us? Let us know in the comments section below.Â

This is UsÂ airs Tuesdays at 9 PM on NBC 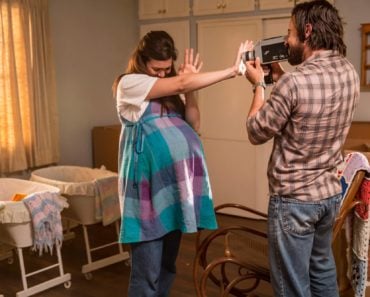