All hail the V’s! They come in peace, you know – but judging by the title of the March 30th return, “Welcome to the War,” that peaceful facade is going to start cracking. ABC has released some tantalizing pics from the episode that suggest some major action is coming, hopefully we’ll see a face ripped off.

Note that ABC will be premiering the previous two episodes of V on Saturday night, March 27th, so all of you socially afflicted people have something to do now. 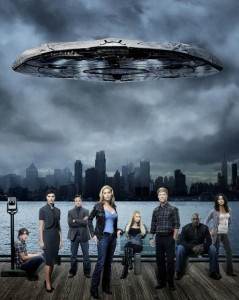 Television’s number one new drama this season in the key Adult 18-49 sales demographic, “V” delivered substantial year-to-year improvement in Tuesday’s highly-competitive 8:00 p.m. hour, boosting ABC by 48% in the time period during its November Sweep run (4.3/11 vs. 2.9/7). Opposite established competition, including CBS’ time-slot veteran “NCIS” and NBC’s “Biggest Loser,” “V” finished No. 1 in its hour among Adults 18-34 and key Men (M18-34/M18-49).