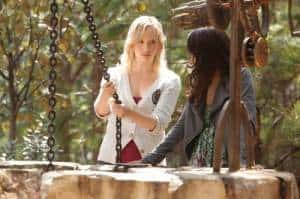 They promised us action, shocks, heartbreak and death and boy did they deliver on that promise. This episode continued to develop the story with twists and speed that I feel like I need to lie down before writing this review. If you would like to read a more in-depth take on this action packed episode then you should check out Mark O. Estes fantastic recap here.

Katherine continues to wreak havoc for all in Mystic Falls despite having some very limited screen time in “Plan B”, though the episode opened with scenes that intercut between Stefan and Elena in bed together and with Mason and Katherine also enjoying some bedroom fun. The positioning of these scenes made me feel a little uneasy, showing a fake manipulative romance alongside one that is genuine had an air of doom that led to neither couple being in tact by the episodes end. So to the first casualty of the season and one that even though I was spoiled that someone would die a permanent death was still shocking, Damon really does love the poetic nature of ripping someone’s heart out. The torture of Mason to find out what Katherine wanted with the moonstone could only have ended with his death really as he posed such a threat to the Salvatore’s. Despite this it is sad to see Taylor Kinney being dispatched so soon, he will be missed by Tyler who now has to go it alone with the threat of the curse and by many in The Vampire Diaries audience.

This episode was pretty high on hearts getting ripped out but not all physically with Elena and Stefan breaking up for real this time after she believes that their selfish actions are the reason for Katherine deploying part of her diabolical plan. After Damon had dispatched of Mason and despite Stefan’s protests a call to Katherine was made to reveal his deed. Not the smartest idea but understandable that he would want to gloat over his actions as he thought he had really screwed up her plans, not so much as Jenna and a self inflicted knife wound would find out. I think at this point it would be time for the Gilbert kitchen to use plastic cutlery from now on, not as effective but far less deadly.

Though the break up scene had a finality to it I’m pretty certain that this isn’t the end for these two, not that that makes this less painful with stellar and teary performances from both Paul Wesley and Nina Dobrev. We also got to see some contrition from Damon who after his post kill high understands that his impulsive actions led in part to the Jenna incident. None of this matters to Elena who believes that they are defeated.

Another scene that got me all misty eyed was between Caroline and her mother who finally began to bond despite Caroline being the very thing that Liz intends on destroying. It is sad to see these two characters sharing so much that will end up with only Caroline remembering, including her mother saying that she is proud of Caroline being a strong and confident person, is this the first time she has received a compliment of this kind from Liz? Strong work again from Caroline Accola who I continue to gush about each week but who really deserves the praise with what she is doing with this character this year.

This really was an episode not only of relationship break-ups but also of bridges being built to repair friendships between Bonnie and all that are on team vampire. Whilst Bonnie reluctantly agrees to help Stefan and Damon at first it was good to see some time spent between the ladies of the show that have been divided over vampire allegiance and with the coming battle with Katherine having a witch on your side is definitely an advantage, especially if she is also your best friend. The scene at the vervain filled well showed that these women together with all their different resources are an excellent team and even though it was surprising that Bonnie did not use her witchcraft it was satisfying to see them together again.

Jeremy got his moment to shine this week as he tried to integrate himself in to the group by sharing all his werewolf knowledge with Damon, and even if Damon did kill him a few weeks ago Jeremy sure seems like he wants to do whatever he can to help. Damon sees him as someone who is useful nuisance as his research helps provide Damon with some nifty bits of information, though after what happens to Jenna the first thought on Jeremy’s mind is vengeance. Lucky he has that protection ring but it still feels like his impetuous nature might get the better of him, hoping that nothing happens to our Indiana Jones (nice reference Damon).

Someone else who is in more immediate danger is Matt who after Katherine took such an interest in him in the season opener was marked from that point and who in the final slam dunk reveal was shown to be under Katherine’s compulsion. She compels him to provoke Tyler and to not stop until Matt is killed…

What an end, what an episode. A+

Can Katherine be stopped and if so how? Where will Stefan get his blood if Elena and he are dunzo? Are you sad to see Mason killed off so soon? Will there be more to follow? Sound off in the comments below or join us in the forums for more on The Vampire Diaries.