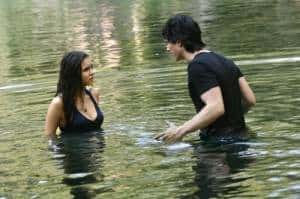 This may only be episode 2 of the new season of The Vampire Diaries but we’re off to a quick and gruesome start. In true Vampire Diaries fashion we got right to the heart (pun intended) of the story and the hybrid campaign of the title was dealt with in swift fashion.

Poor Ray Sutton (David Gallagher); as soon as he stepped into that bar last week his writing was on the wall, but who could have predicted a death that was that torturous (I expected some level of pain but that was truly horrifying)? This was an episode that was high on the gore level all in the name of a hybrid army- from bleeding eyes to the standard Salvatore heart rip move. So Klaus’ plan to make an army of hybrids failed despite his belief that he completed the sacrifice ritual correctly; Elena’s (Nina Dobrev) life really will be in danger if Klaus finds out that he didn’t actually kill her dead dead. Though let’s hope that Stefan can get a better poker face next time the doppleganger is mentioned. Thankfully his poisonous werewolf bite gave him cover for his grave and concerned look.

It’s also lucky for Elena that Klaus didn’t hear her and Damon (Ian Somerhalder) as Stefan did, but luckily he had other things on his mind. The Elena/Damon relationship sure has taken an interesting turn; both want to save Stefan but there also seems to be a chemistry between the pair that has changed since their ‘deathbed kiss’ that Alaric (Matt Davis) is also aware of. This will get all kinds of complicated as they continue to try and get Stefan back and there was a certain intensity and crackling bond in the bedroom scene. Can you see a Damon and Elena union this season?

Whilst Alaric may not be the most responsible adult, he is integral to Elena and Jeremy’s (Steven R. McQueen) life so it was great to see him return to the Gilbert house and this time to what looked like a bedroom. So he may drink too much whisky but at least he knows how to pack a bag of appropriate weapons (that wolfsbane grenade really came in useful). Also where you get Alaric you also get a snarktastic Damon and these two are one of the shows best pairings.

Another pair who are superb together are Stefan and Klaus and even if Stefan appears cold and indifferent at times with Klaus they really do have great chemistry. Klaus has in many ways assumed the role of Damon to Stefan, calling him out on his brooding and trying to get him to lighten up. The difference here is even if Stefan didn’t know Damon’s exact plan, he knows him well enough to predict his behavior whereas Klaus is an unknown entity in many respects. We still don’t know why Klaus wants Stefan around and neither does Stefan making this whole partnership all the more mysterious and dangerous.

We had an unfamiliar face come to town as Carol Lockwood (Susan Walters) called in an old friend to help her with her Caroline (Candice Accola) situation. This old face turned out to be Bill (guest star Jack Coleman) a member of the council who also happened to be Caroline’s dad. How will Caroline get out of this one? It appears that Carol acted too soon with her ‘but she’s a monster’ defense after Tyler revealed his true self and it looks like Carol has rethought her position. The council appear to be turning one by one. 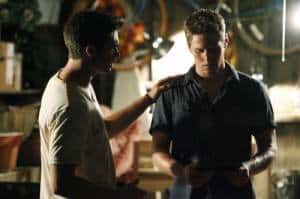 A photo that went from face down to standing up was a moment that actually sent a shiver down my spine, as Jeremy enlisted an apprehensive Matt (Zach Roerig) to help contact Vicki (Kayla Ewell). To add to this creepiness when Vicki did appear to Jeremy it was followed by a window smashing. Vicki claims that she can be brought back, unfortunately for Jeremy, Vicki isn’t his only ghost and Anna (Malese Jow) states that Vicki can’t be trusted. It would be about time for Jeremy to inform the not yet back in Mystic Falls Bonnie (Kat Graham) of these recent events.

This show sure does know how to start a season big and this year is no different. Klaus appears to be a smidge weaker with his lack of a hybrid army though we can’t count him out of having another plan. Despite Stefan trying to push those who care about him away through any means necessary this has not worked and he remains a much cared about vampire. The set up this year is very strong and I look forward to where the story is heading.

So with Klaus’ big plan shot to hell where will he and Stefan go next? Can Elena stay safe as well as save Stefan? What will become of Caroline at the hands of her father? Let us know your thoughts in the comments below.

For a sneak peek at next weeks flashbacktastic episode head here.