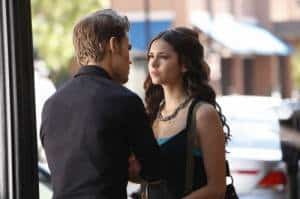 Every week The Vampire Diaries has moments that leave my jaw on the floor and this week is no exception with some brilliantly executed twists and revelations. This episode saw family bonds tested, secrets shared and one character being pushed to his limits and was coupled with the usual amount of snark and blood spilled. We’re only 4 episodes in but season 3 continues to be highly entertaining whilst pushing all the story threads along with ease.

I will begin as the episode did with the Chicago portion of the episode which saw Stefan (Paul Wesley) attempting a diabolical plan which didn’t really come together for him. Katherine (Nina Dobrev) warned him that despite his so called ‘bad’ status he really isn’t cut out for that sort of thing and because diabolical plans are her favourite of course she wants in. Stefan of course likes to do things solo and so rebuffed the offer. It’s a good thing that Katherine has a thing for stalking Stefan as she managed to get him out of some witch peril as Gloria (Charmin Lee) tortured him for information about the necklace (shirtless torture of course). Before Katherine got there Gloria had pretty much deduced the whole Stefan/Elena back story complete with a nice montage. Gloria wasn’t intent on giving the necklace to Klaus (Joseph Morgan) but wanted the talisman for herself, too bad really that she figured it all out and had to be killed as I was enjoying this character. Witches who own bars don’t really have much luck on this show.

The problem with Stefan and his plan is that he wants to find out the identity of who was chasing Klaus and Rebekah (Claire Holt), who they were both afraid of and they are not likely to give up this information freely (we do get a name- Mikael). His other problem is that Rebekah has an intuitive streak that can figure out when he is lying and clearly he is holding something back. He also can’t love her as she does him which is also likely to arouse annoyance from this brat of a vampire- this bratty streak has weirdly endeared me to Rebekah, who really could be a whole lot of fun especially if she encounters Katherine. Suspicions are in fact aroused of course and Stefan ends up back in the home town of the person he is trying to protect; Mystic Falls. Also did it seem like Stefan was going to open up the coffins and unleash the other Originals? Or maybe just Elijah (Daniel Gillies)? Pretty please to the latter.

Family is one of the big momentums in this show for a lot of the characters actions; Stefan is where he is because he wanted to save his brother (a fact that Klaus secretly admires), Klaus may have killed his entire family but keeps them close at all times, even if it is in such a macabre manner and back in Mystic Falls we get to see Caroline (Candice Accola) protecting her family no matter what pain her father had inflicted. You would think that I would get bored of heaping praise on Candice Accola but really I don’t and this week she got to play a range of emotions, but really this praise is mostly because she got to kick Damon’s (Ian Somerhalder) ass. 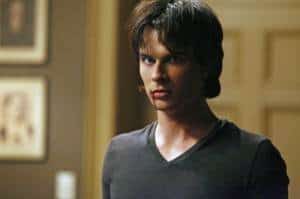 Now to Damon (like I would forget him) who really doesn’t like to be told what to do and proved this by going on a self destructive path. This ranged from the the mild to the crazy, which included getting mad at Elena and reinforcing the fact that he isn’t Stefan and it’s got to hurt that she is kind of (perhaps unconsciously) trying to mould him into a Stefan type. Elena in all of this is having a hard time with her feelings toward Damon and this situation will only get more complicated.

The snapping of Alaric’s neck was on the crazy end of the spectrum and unsurprisingly it will take more than an ‘I’m sorry’ drink to heal this relationship. Damon is the more ‘crazy and impulsive’ brother (thanks Klaus for this description) so these actions really shouldn’t seem out of the blue, nor his decision to go with Katherine to whatever secret location she has in mind. Like the neck snapping I really should be more prepared for the Katherine as Elena trick, but really Nina Dobrev is so good at playing both that it still fools me like she did with Bonnie (Kat Graham) and the necklace swipe. What is Katherine’s endgame with all of this?

Speaking of Bonnie she returned this week just in time as Jeremy (Steven R. McQueen) continued to get ghostly visitations, but only from Anna (Malese Jow) this week. The scenes between Anna and Jeremy reminded me how awesome these two were together but despite Anna’s seemingly good intentions I have to wonder if there is some malevolent spirit behind it all, is she the darkness? At least Jeremy revealed the truth to Bonnie, now we can maybe find out what is the meaning behind these ghostly visitations.

Considering how much is being balanced in this episode with Stefan in Chicago playing along with Klaus and Rebekah and with the multiple Mystic Falls stories (sorry Matt you were the only one not included this week) it could be a mess of storytelling, but this episode proved that all these elements can indeed be balanced. With the shift in location for next week with Stefan being back in Mystic Falls it looks like some really bad things are going to happen. But where will Damon and Katherine be?

What did you all think? Glad to see Bonnie back in town? Do you still get fooled by Katherine as Elena still? Happy to see Caroline kick Damon’s ass? Let us know your thoughts in the comments below.