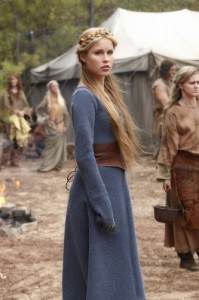 That was a history lesson and a half as we learnt the origin of the Original family and how they came to be the Original vampires. Having to reveal this much information might have been a drag, but thanks to the always good Vampire Diaries flashbacks and Rebekah (Claire Holt) as a narrator this was far from a bore. It also helped that this amount of exposition was combined with a separate Damon (Ian Somerhalder) and Stefan (Paul Wesley) story. This once again showed how great these two are together and how much this dynamic has been absent for most of this season.

Elena’s (Nina Dobrev) plan to have a “mean girl power struggle” with Rebekah actually worked in getting her to spill her secrets; of course prodding was needed and as ever it wasn’t a simple ‘so tell me your life story’ kind of affair. Essentially, in the most simplistic way Rebekah is just like any other girl at high school (albeit a powerful 1000 year vampire- how old when she was turned?), who wants to have friends and go to parties in nice clothes. Elena has spent enough time around vampires to know how to manipulate the conversation to her advantage, all that time playing Katherine’s (where is she?) mind games has paid off as she got Rebekah to reveal all the important details.

As the exposition fairy Rebekah did a good job, as did the narrative structure of the episode that balanced flashback and present day scenes (though I have to admit I was frantically scribbling notes down). Also Rebekah’s mention of Vikings in history class a few weeks ago now doesn’t seem so stupid to Alaric (Matt Davis), who really seems to be in his history nerd element with all the cave paintings. Protecting family is the key theme of their backstory- first from disease in Europe, followed by the predators in the US (long before it was the US). Klaus (Joseph Morgan) is at the heart of all of this as it was his intrigue about the werewolves that led to his younger brother being killed, which in turn led to the creation of vampires. No wonder Klaus turned out the way he did, that’s a lot of guilt right there.

The big reveal in this story about how they became vampires isn’t that Mikael (Sebastian RochÃ©) is their father, as this is something I think most had guessed (ha to Damon’s “Papa Original’ naming). The big surprise is that their mother Esther (Alice Evans) was a witch and not just any witch, but the witch from the Original family. It is her talisman, which she received from another powerful witch that has been the source of much of this seasons bother. The even bigger twist was not in the version of the story that Rebekah told; Rebekah believed that her father had killed her mother by ripping out her heart, but in reality it was Klaus. This destroys the 1000 year relationship and unsurprisingly turns Rebekah into a sobbing heap. How will she react when she sees her brother again? 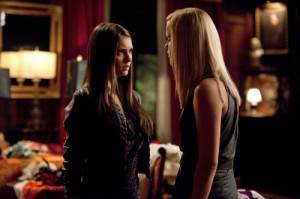 Rebekah won’t have too wait to long for this reunion if Stefan has anything to do with it, as it looks like he will be luring Klaus back to Mystic Falls at the behest of Mikael. The key question here is whether Stefan agreed to this to save his brother or because he wants his freedom and I think despite Stefan’s argument that it is the latter, it truly is the former. Elena puts it best when she tells Damon that Stefan will be saved not “because he loves me. It’ll be because he loves you.” We have seen throughout this show that even though Stefan and Damon don’t seem to like each very much they really will do anything to save the other. This echoes Rebekah’s sentiment that despite all the awful things Klaus has done to her, it is a better option to stay with him than to spend eternity alone.

The snarky back and forth between Damon and Stefan was wonderful; the dungeon plan isn’t really Damon’s style but going “off book” to a bar really is. This not only allowed us to see Damon cutting loose and getting to dance on bar once again but also allowed him to enjoy the non-bunny diet Stefan; the Stefan that he’s been trying to tempt since season 1. Not that he really likes this version of his brother, who he calls ‘an even bigger dick than ever,’ I think he’s missing the brooding and guilt ridden brother he berated in the past. Not that I’m ready to have old Stefan back yet, as this bad ass version really is a lot of fun.

The final scene between Elena and Damon is enough to fuel the flames of the fandom and the slow burn of the Elena/Damon relationship has been handled well by the writers. There is now an element of trust between the pair that allows each to try their own plans with obstacles like Stefan and Rebekah and both were actually somewhat successful. They are now in a much stronger position with the knowledge that they have acquired but this battle is far from over. Where will they all stand when Stefan eventually gets his humanity back?

–Like Stefan with his empathy and Caroline (Candice Accola) being a control freak, the Original vampires all have aspects from their humanity that are heightened as vampires. Rebekah is stubborn, Elijah (Daniel Gillies) is moral, Klaus has no tolerance for those who disappoint and Mikael has pride.
–Good to see Alaric not straight up defending Jeremy’s (Steven R. McQueen) actions but also telling Bonnie (Kat Graham) that he too was a Jeremy (read idiot) at one stage in his life.
–Love that Rebekah wanted to snoop in Stefan’s room but Elena was less than enthusiastic about this.
–Flashback wigs are always a favourite. Claire Holt looked particularly lovely in her flashback costume.
–Nature’s way of restoring balance by giving a weakness for every strength to the vampires was a nice touch; the tree that gave them life could kill, vervain grew at the base of the tree so that was harmful and would stop compulsion and the sun would burn. Though Mama Original was the first to enchant jewellery to allow for day walking.
–So witches can’t be vampires, I’m sure Bonnie will be pleased to know that bit of information.
–Elijah was a welcome sight, how long before he has his dagger pulled out of his chest?
–The heart-ripping thing really is an Original family tradition; every family has to have one I guess.

Like previous heavy mythology episodes such as “Bad Moon Rising”, “Katerina” and “Klaus” this episode managed to explain a much larger story in a simple and effective manner. Yes there were lots of details and some surprising twists (it wouldn’t be TVD if there weren’t twists), but by anchoring the whole thing to family gave the viewer an emotional tether to all the details being spilled. Rebekah proved to be more than a spoilt brat this week, very much like Caroline before her and I would really like to see her stay in Mystic Falls. Plus we really need to see Katherine in a scene with her as I can imagine there will be a rivalry. This is a really strong episode that is leading to next week’s mid-season finale (sob) and the pieces really are being put in to place for a Mikael/Klaus showdown, will Mikael be able to defeat Klaus now that he is a true hybrid?

What did you think of “Ordinary People?” Surprised by the origins of the Originals? Can Stefan’s humanity be saved?

Next week: it’s homecoming in more ways than one, plus hot men in hot suits. For the promo photos and video head here and here.