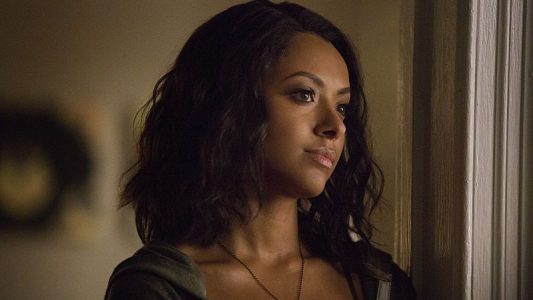 While a whole lot of the storylines thus far this season on The Vampire Diaries feel like deja vu, they still manage to surprise us with a proposal. Now this won’t be the first wedding on the show (thanks, Kai) but it will be the first vampire wedding at least!

Sybil the siren not only looks like Elena 3.0 (or if we’re counting all the doppelgangers, 7.0) but her controlling powers are also too reminiscent of Rayna Cruz from just last season. Rayna could get into her victims’ heads and they physically could not escape her. So much of Sybil has reminded me of Rayna starting with her obvious appearance similarities and she’s only just gotten a name this episode. Already she’s messing with Damon’s memories of Elena by essentially rewiring his brain to remember meeting her on that deserted road late one night instead. (Also not anything we haven’t seen before. Remember Elena had Alaric erase Damon from her memory?) She’s onto Enzo’s plan to protect Bonnie, and judging by how quick she was to take care of Sarah Salvatore (RIP) Bonnie is not safe.

Bonnie needs a thousand hugs and some real friends right now without even knowing that Sybil may or may not be after her next. Honestly her flashbacks with Enzo were cute and all for the shippers, but nothing broke my heart more than her confession to Caroline. Seeing Car live such a happy life with Stefan and her kids makes Bonnie feel so alone that she wants to die. Years have gone by since the time jump occurred last season, and it would appear Caroline has indeed been preoccupied with co-parenting and getting back together with Stefan. I’m glad Bonnie felt comfortable enough to tell her the truth. It’s not like Caroline wasn’t invested in the race to save Damon for Stefan, but now she’s also Team Enzo for Bonnie’s sake.

Little did Caroline know what Stefan had in mind for her when she got home from dropping Bonnie off at her little cabin in the woods. (By the way, the Salvatore mansion is big enough to spare an extra room for Bonnie, don’t you agree? I don’t feel right about her living alone if she’s already depressed. Not to mention the evil supernatural being after her.) Stefan and Caroline are engaged! The rumors were possibly true about a June wedding for Steroline. In the preview for next week they’re already heavy into wedding planning which baffles me. First of all, they’re vampires so they have absolutely no rush for time. Second, I hope the news doesn’t break Bonnie any further. Caroline can make all the promises in the world to help her save Enzo from the siren but no one knows what they’re up against or what’s going to happen.

There’s a lot going on with Alaric back at the Armory. He had some fun playing Indiana Jones to discover the perfectly preserved cave with ancient artifacts but the scenes with Georgie are especially revealing. Her story about having experienced hell was crazy. One could say she’s subjecting herself to hell everyday having gotten that symbol tattooed on her stomach to torture her every day until she potentially ends up there after death. I like where this is all headed though. With more talk of hell we’ll learn more about Sybil and/or the devil and all the storylines will converge.

The Vampire Diaries Season 8 Episode 2 Review: “Today Will Be Different”

Stefan, Caroline and Bonnie continue to chase after Damon and Enzo under the siren’s spell.