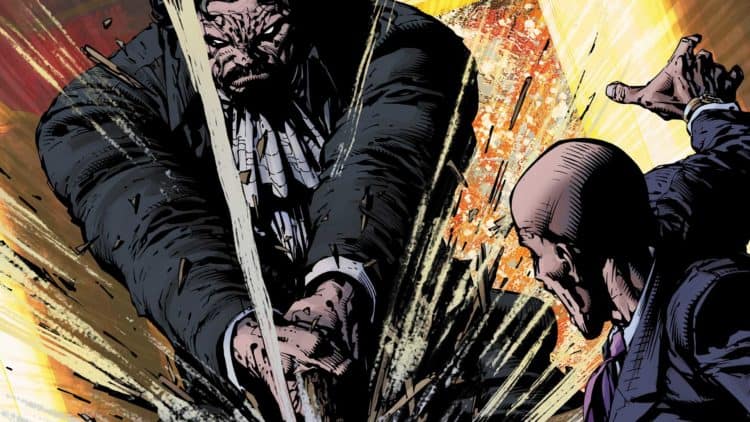 Vandal Savage is one of DC Comics’s most notable villains. In part, this is because he has existed for decades and decades in the real world, meaning that the character has managed to get involved in a fair number of stories. However, it should also be mentioned that Vandal Savage is based on an unusual premise that doesn’t just enable him to stand out but also makes him usable in a wider range of stories than otherwise possible. In any case, while Vandal Savage might not be as famous as, say, either Lex Luthor or the Joke, the sheer number of his appearances in DC Comics media should make it clear that he isn’t that far behind them. Here are 10 things that you may or may not have known about Vandal Savage:

For starters, Vandal Savage is a very old character in more than one sense of the word. One, his first appearance came in the tenth issue of the Green Lantern comic, which was in 1943. Two, the character has existed in the DC Comics setting since before the start of human civilization, though there is some variation on his exact age.

Primarily, Vandal Savage is famous for being immortal, which is the result of his exposure to a mysterious meteorite that produced miraculous changes within him. Besides this, the radiation boosted the character’s speed, strength, stamina, and intellect, though not so much so that he can take on, say, someone like Superman under normal circumstances. On top of this, Vandal Savage possesses considerable expertise and experience on a wide range of topics that he has built up over the course of his immortal existence.

4. Has Claimed to Be Both Khufu and Khafra

Perhaps unsurprisingly, Vandal Savage has claimed to be various famous figures from various times and places. For example, he has claimed to be both Khufu and Khafra. For those who are unfamiliar with those names, Khufu was the Egyptian pharaoh who commissioned the Great Pyramid of Giza. Meanwhile, Khafra was one of Khufu’s sons who commissioned the second biggest pyramid at Giza. Herodotus claimed that both Khufu and Khafra were cruel and tyrannical rulers, but modern Egyptologists tend to be skeptical of said claim because there isn’t much evidence to support it.

While Vandal Savage could be telling the truth in some cases, it seems probable that he isn’t in others. For instance, he has claimed to have been both Julius Caesar and one of the Senators who assassinated Julius Caesar. However, it is possible that this is a result of changing visions for the character over time, which is sometimes that has impacted plenty of other comic book characters.

6. Has Claimed to Have Been Genghis Khan

It is interesting to note that in the Young Justice version of the setting, Vandal Savage is confirmed to have been Genghis Khan. To be exact, he fought Darkseid when the Lord of Apokolips invaded the Earth. Vandal Savage lost that particular fight, but he managed to impress Darkseid enough for the two to make a pact to conquer the universe before fighting each other to see whether Earth or Apokolips would rule supreme.

7. Has Claimed to Have Helped Other Notable Figures

8. Has Been More Heroic in Certain Time Periods

Vandal Savage was a more heroic individual in at least one time period. In short, Demon Knights was a comic book series that focused on a group of characters in the DC Comics setting’s version of the medieval period. One of those characters was Vandal Savage, though even there, he had his moments of shadiness in spite of his seeming likability.

Over the course of his life, Vandal Savage has had numerous children. Generally speaking, the most famous would be Scandal Savage, who has shown up as one of the members of Gail Simone’s version of the Secret Six. However, it is interesting to note that Vandal Savage is also supposed to have been the father of Grendel of Beowulf fame. Not coincidentally, there are stories in which Vandal Savage has been said to be the Biblical Cain, which is relevant because Grendel is supposed to have been descended from the line of the First Murderer.

10. Has Reappeared on Legends of Tomorrow

Very recently, Vandal Savage reappeared on the finale for the fourth season of Legends of Tomorrow. In short, the character made two notable appearances in the Arrow-verse. First, he was the main villain for the second annual crossover “Heroes Join Forces.” Second, he was the main villain for the first season of Legends of Tomorrow before he was killed off. In the recent finale, Vandal Savage showed up in hell where he was supposed to torture Ray Palmer but winded up befriending him instead. There is no indication that the character will be making further appearances, so for the time being, it seems that this will be a one-off.