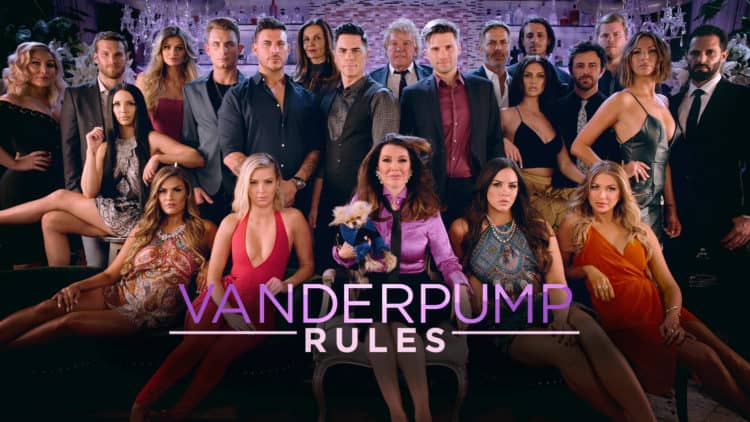 The Bravo series “Vanderpump Rules” has been a hit since the series made its debut in January of 2013. Lisa Vanderpump of “The Real Housewives of Beverly Hills” was ready for her own series. The cast of zany employees at the SUR restaurant are an interesting group which add to the entertainment value of the show. It’s an award winning member of the reality TV genre and it provides us with some great ideas for potential spin offs that would probably be successful. When thinking about some really good ideas, as long as you include the elements of the show that makes is a raging success and the things that people already love about it, you should have the formula for some great new reality television series, or maybe even something that drifts into the realm of fiction. Here are 10 Vanderpump Rules spin offs that we could see working.

Lala Kent is an interesting character on the show and what we see is the real deal. The reason a spin off series that gives us a better look into her life is that “Vanderpump Rules” doesn’t really get in depth enough to satisfy us. We’d like to get to meet Randall Emmett, if that would be okay with the two of them and the way that she defends him when others have a bad word to say is intriguing to say the least. We’d like to know more about her makeup line and what she does when she’s not appearing on Vanderpump. According to Marenah Dobin, there are quite a few fans out there that would really like to see this and hurry please, because they’re a bit insistent that it should happen soon.

We see great potential in a spin off of Vanderpump rules that shows us the private hell that Lisa is going through as she attempts to juggle so many different responsibilities at one time. As most fans know, she’s been working hard on the new Vegas cocktail garden and when the question was posed about a new spin off that would center around this venture, she said that it was a “Hot Mess.” What a perfect title for a new series that would tell everyone what they could expect to see right up front. There would no doubt be plenty of drama and the change of venue would be refreshing. If she is as good at drumming up another set of workers as she was for SUR, there is little doubt that this would be one hell of a raging success. Even though she seemed t)o disregard any notion of adding more on her already side racked plate, it would certainly be something worth looking into. It would be something that a lot of fans could easily relate to and it might even make some of them feel better about their hectic lives. There are a lot of different directions that you can take a hot mess, so we think that this is a great idea as a spin off of the show.

A fan had a killer idea to revive the reality TV series with the infusion of some new blood. She was quick to point out that the cast that is on board is currently beginning to age. She suggested that a spin off of the original series that features younger actors at SUR might make it possible for the show to go on for longer. It might be worth a go to start infusing some younger people into the mix. A few younger cast members who are unmarried and who experience all of the drama that people go through when they’re in their early 20s would definitely spice things up a bit. As people get older, they certainly do still have a lot of drama and interesting things happen in their lives, but if you bring some younger characters in and throw them together, you’re going to also have the benefit of a generation gap and there’s usually some pretty funny interactions that take place in these situations.

4. Behind the scenes at SUR

What about a spin off that details the interactions of some of the cast members that aren’t regularly featured? Wouldn’t it be great to see them interacting with one another behind the scenes of the popular reality series? Have you ever wondered how they feel about it and what they talk about when the cameras are rolling and they’re not in the scene? Now that’s reality television and it would be great to be a mouse in the corner of the room. We think that this would be an excellent spin off series and there are plenty of others who agree. Besides, this gives us a whole new perspective on what it takes to keep the place running while others are getting their fair share and more of the attention from the audience. It might be nice to let some of the other hard workers take a turn in the lime light for once. Who knows, there may even be some even better ideas for spin offs after getting to know them a little better.

If you’ve really paid attention to the cast of “Vanderpump Rules” then you have a really good idea of how much alcohol they consume both individually and collectively. If you’re really looking for a spin off from the series that takes some of the heuristics of the group in a new and different direction, it could be something that focuses intently upon the cheating and the drinking, because both of these things happen a lot on the show. A reality series that centers around this would have no problem achieving decent ratings and we’re imagining that the viewership would also go insanely high. These are two themes that are consistently repeated on the show. When you stop to consider how popular the original is, then it just makes sense that a new series that contains such entertaining elements can’t help but be a success. You couldn’t possibly dream up a couple of scenarios under which there would be more drama and we’re thinking that things would get pretty intense. It’s the kind of stuff that makes you want to cringe, kinda like a good episode of “The Office,” and this is the kind of thing that draws fans out of the woodwork like a moth to a flame just to watch it all go down. Do you think that anyone would be willing to sign up for a series like this? If not, perhaps they’d serve as mentors for a new cast of actors who would be willing to lay it all on the line for a good show. It’s worth thinking about anyway.

6. Jax and Brittany: Patching it up

Another idea that we had for a spin off wold center around Jax and Brittany and their relationship woes. These two are not everyone’s favorites on the show but they’ve got a decent sized following and there are a lot of people with inquiring minds who would like to know just a little more about what goes on behind closed doors. It’s great that they’ve made the commitment to go see a therapist. It’s a healthy decision but it’s not something that the fans are privy to. Have you ever wondered what goes on in those sessions? Wouldn’t it be great to know? A spin off of Jax and Brittany would be nothing short of amazing and if they wouldn’t be willing to bare their souls collectively for the sake of their adoring fans, it would also be fine if they’d fake it in a fictional setting. We don’t really give that much of a damn when there’s a great potential story line at stake here. Let’s face it…these two are interesting and there’s a whole lot more that we’d like to know about what goes on behind the scenes. While there are some “Vanderpump Rules” fans that have no desire to see their sessions televised, we believe that there are a whole lot more of us who definitely would.

7. James at the Helm

Since Jams started seeing a therapist and he’s brave enough to do so for viewers, it’s a great idea for a spin off. The reason that he’s there is because he has a lot to deal with on an emotional and a physical level. In a bit of role reversal, it is James who is supporting his two parents and he certainly doesn’t have it easy. If you want to talk about reality TV, this is about as real as it gets and it’s something that fans would probably be able to easily relate to because there are a lot of people who are grown and out of their parents’ homes that still have financial and other responsibilities that they must fulfill. It’s a relevant topic and it might just take us in a different direction with the character and a better understanding of what goes on in his life and in the lives of his parents.

When we learned that Jax has a passion for firefighting it gave us a great idea for a new spin off series. He actually nearly went back to Florida for a career in firefighting, but decided to remain and become a star in the VPR series. With what we’ve learned about his current lifestyle habits, a series with him in the starring role and working in a firehouse might not be a bad idea. There would certainly be action, adventure, scandal and a whole lot of drama, but we’d suggest dragging Kristin along to spice it up and make things more interesting. Maybe Stassi too for that matter. It seems that Jax is really good at instigating new dramas and a bit of scandal and with his looks, it’s something that fans would probably not get tired of seeing.

This would be a great idea for a “Vanderpump Rules” spin off. Katie Maloney is absolutely gorgeous and her love of beauty enhancement provides the fodder for an interesting spin off because although she’s a knockout, there is a sense of reality and natural beauty that she possesses. She’s a low maintenance member of the cast and a spin off that features her might just be refreshing. She’s a blogger and is the author of “Pucker & Pout” which is about beauty . She’s also a very talented young lady who knows how to make her own beauty products out of natural ingredients. We think that she’d probably have a decent following in a reality series, but she would probably need to import a few drama queens to keep it on the edge.

Here is another idea for a “Vanderpump Rules” spinoff. Tom Schwartz and Tom Sandoval are two besties who just happened to have met through an ad that was placed on Craigslist. What a way to meet, but it’s worked out very well and they have their own restaurant and bar called “Tom Tom.” What better story line could they have? They met in a bit of an unusual way and their friendship as well as the business partnership that they’ve formed continues to be strong. It’s our humble opinion that Two Toms and a Bar would be a hug success if they have the right kind of patrons and co-stars in their employ at the restaurant/bar. We’re not sure, but we think there could be some considerable drama involved in the venture.