Home
TV News
Veep Never Needs to Air another Episode: Should it Go Out on Top? 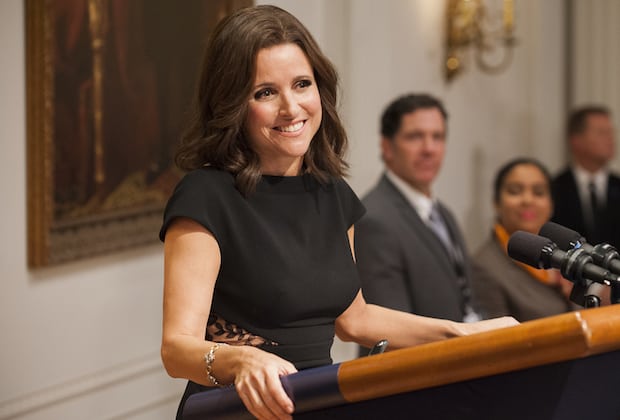 Sometimes shows need to go out when they’re on top, when their star is shining the brightest and they can’t do any wrong. Veep has been one of those shows that people have flocked to in a big way and have enjoyed with such immense pleasure that you can’t help but think they knocked it out of the park. But the end is coming and as Jen Chaney at Vulture has indicated things are already starting to get emotional even before the table reads. That’s easy to understand, no one wants to see a show that means so much just fade off when a lot of folks seem to think it could keep going and really generate a lot more buzz if it stuck around. But there’s an issue with sticking around, and it has a lot to do with the fact that setting the bar so high for yourself is a detriment as well as a milestone.

Willa Paskin from Slate might be talking about a different show in terms of whether a show should end or not, but the general idea is that some shows simply don’t end, they pause and take a breath before continuing. In some cases this might be a good idea, but unless the show can meet the same bar that it set before the pause then it’s going to disappoint the audience that is waiting for a resurgence of the same kind of hilarity and story that they came to enjoy so thoroughly in the first place. This is a danger of which many people are well aware and yet many still don’t seem to heed at times. Veep doesn’t deserve the same treatment as so many other shows since quite honestly like those other shows that were driven into the ground it’s brought too much joy the people throughout its time and it’s simply the right moment to end it and finally say goodbye. There will be other shows, other enjoyments that people will find, and yet they’ll still remember how good Veep was and how it brought them so much joy. In fact if they’re lucky they’ll remember it so fondly that it will be something that they use to compare to other shows in an attempt to remember the good times.

Going out on a high note is one of the best ways for a show to go since it preserves what it is and what it was without wondering what it could be and then acting on that ill-advised impulse. Too many shows have been lost to seriously flawed story lines when they’ve attempted to hang on, especially those that have a set premise and plot that doesn’t change and isn’t meant to be as versatile as other shows. There might be a lot of material that could be brought to bear and a lot of story lines that could possibly work, but trying to sort through them all simply to keep around a show that people are already fond of could be disastrous since it would change the tone, pitch, and even appearance of Veep now that everyone knows the end is coming. In way a continuance or a reboot is almost like a middle finger to the fans with a “ha ha kidding” thrown in when they’ve already been given a set expectation. Some might actually enjoy the chance to keep the show around, but others would no doubt wonder the same thing, as in what’s going to be brought in to top what’s already come along.

The saying ‘a story stops but never ends’ is entirely valid since in the ideal setting a story will continue in some way even after it’s no longer in the public eye. That sounds silly to some people since a story obviously doesn’t move forward without anyone there to keep writing it, but if you’re in the mood to be silly you can see how the story will continue on its own in some way no matter the fact that no one is putting the pen to it any longer. It’s certainly stopped, but without being given a definitive end in which the world it occupies simply ends, then the story is stopped, not ended. Enough theory and philosophy though, Veep is coming to an end in terms of being seen on TV any longer, save for reruns, and people have a lot to say about it at this time. As Jackie Strause of The Hollywood Reporter has pointed out though in her explanation of the finale, things really couldn’t have gone any better, and the manner in which it was decided to bring the show to a close was done so beautifully that trying to bring it back once again would be a serious insult to a show that’s just fine the way it is.