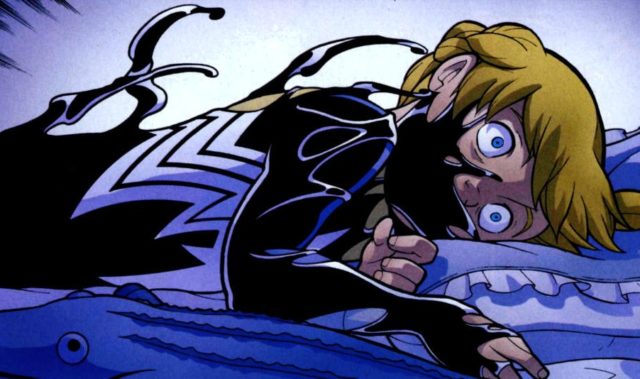 For those who are not aware, the Symbiote is a fictional character that appears in several American comic books that are in most cases published by Marvel Comics. While this character might be associated with Spider Man, the Venom Symbiote has risen to fame since its incorporation in the Deadpool films. It’s important to know that the Venom Symbiote first appeared in the Amazing Spider Man in the late eighties.Â  The character was originally developed as a super villain but has over the years been converted into an antihero. In fact, the Venom Symbiote is a silent alien, with a unique liquid character that makes it perfect for almost any type of superhero fiction movie.Â  In this latest issue of the `Venomverse`, the unique combination of Deadpool and the Symbiote make up for a unique character combination.

There's nothing more terrifying and slobbery than Venom latching onto Deadpool! Pick up "Edge of Venomverse" #5 at your local comic shop. pic.twitter.com/r4Z7JqDm7N

After bonding with the host, the Symbiote endows its unique powers on the host. In particular, when it bonds with a human, the new dual life form is often referred to as the `Venom. ` Marvel Comics is currently running a comic series that is known as the `Edge of the Venomverse`, which sees various classic superhero’s being overtaken by the Symbiote. As a method for promoting the dead pool being taken over by the Symbiote, Marvel has just recently a short clip that is animated. It demonstrates how the symbiote ended up attaching to Deadpool.

This unique version of the Venomized Deadpool made several appearances in the Veneomverse version 4. It’s also important to know that this is not the first time that the Deadpool and the Symbiote are combined in a specific storyline. For instance, in early 2011, in a special `What If shot by Rick Remender, provided a never-before-seen aspect of the Symbiote which had bonded with Deadpool.

The Edge of Venomerse series has been featured various strange and intriguing themes, which have all been released by Marvel Comics. All these series have demonstrated how this `liquid-like` and `gooey-alien-like` creature would bond with various big names in the fictional action industry. This particular version comprises of one of the biggest names to hit the movie industry. The short preview shows Deadpool involved in a gunpoint situation with a crazy scientist, who retains the power of the symbiotic beast in a can within his hand. With that being said, Wade Wilson is oblivious of this fact, as he shoots the goo and inadvertently releases the alien.

Once the Venom is released, it takes over Deadpool and leads to a unique dual like creature. The appearance of this Symbiote is just as terrifying as you’d expect, with a unique trademark black and white face, with serrated teeth, thereby replacing the unique red and black mask. It also has an animalistic tongue, which is scary and it has access to Deadpool’s entire Skillset, thereby making it a unique combination. This short presentation provides an eye-opening version of the Deadpool interacting with the Symbiote, in the Edge of the Venoverse series.