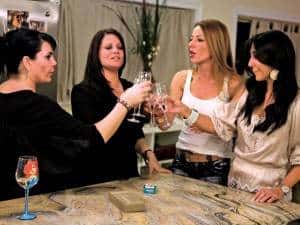 It’s only been a few months since we last saw the women of VH1’s Mob Wives, but if you’ve been missing your weekly dose of Drita, Renee, Carla, and Karen, it looks like you won’t have to wait much longer.

VH1 has announced that Mob Wives will be returning on Sunday, January 1st at 8:00 for the first of the 12 episodes in the show’s second season. If that wasn’t enough, the network also broke the news that we’ll be seeing the first Mob Wives spin-off sometime in spring 2012. Mob Wives: Chicago, which has no concrete premiere date or announced cast yet, continues the expansion of the “wives” franchise that VH1 has had success with recently. On deck next for the network, home to the likes of Basketball Wives: LA and Love & Hip Hop, is Baseball Wives, which is set to debut on Wednesday, November 30th.

Will you be watching the second season of Mob Wives? Do you think it’s too soon for the show to have a spin-off? How do you think things will be after the explosive season one finale?