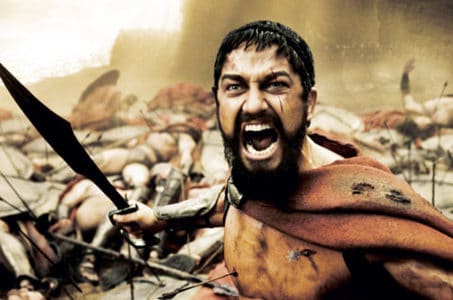 Ending on Casablanca was a definite plus for this clip, but it was great all the way through since the movie quotes that people use on a constant basis are pretty well known and a lot of them are still in circulation at this point since they made such an impact when they were first spoken that they didn’t just stick in the minds of a lot of people, they were chiseled in stone and set on repeat if that makes sense. A person can definitely find a lot of people just waiting for the perfect moment to spout one of these lines since they’ve been iconic ever since they were laid down, and many upon many movies have actually made use of the same lines over and over in various ways. Some are more powerful than others and some are decent but don’t tend to be used as much, but the fact that they’re remembered means that they were meaningful and managed to get the attention fo enough people and were able to stick around. Lines such as “This, is, SPARTA!!” tend to need a specific moment in which they can be used, while other lines such as “You can’t handle the truth!” can be used fairly often and in a lot of different ways. But despite how specific each line can be or how loosely it can be used in so many ways, the point is that these lines have been taken up by fans as something worth remembering.

It’s easy to wonder just why certain quotes get people riled up and make them pump their chest up with pride, but there are times when it’s the quote itself, or the delivery, or the attitude with which it’s given. Think about what might happen if any of these people had changed their attitudes mid-stream while speaking, or if they would have delivered them in a stronger or weaker manner. Some of them would have been utterly ruined since a submissive voice in the face of another individual would have felt just wrong, while being too forceful at the wrong moment would have likely been a bit too aggressive. The attitude that’s delivered along with the words is a big part of what makes them memorable since they become set in the mind in this manner and as a result, this is how we remember them. Watching King Leonidas boot the messenger into the pit of death wouldn’t have been as great to watch if he’d simply stated that ‘this is Sparta’ in a passive voice and then launched his forward kick.

Plus, in A Few Good Men, if Tom Cruise had remained calm and rational, it’s very likely that he would have appeared too timid, too cowed by Jack Nicholson’s performance since the two were growing quite heated during the questioning and there was no other way to go with it. Of course some lines such as “You’re gonna need a bigger boat.” wouldn’t have worked had Roy Scheider shouted it into Quinn’s face. Plus, just imagine Rhett shouting at Scarlett, “Frankly my dear, I don’t give a damn!”. That would have likely been mocked to the end of time and back since it would have been such a shock to hear on the big screen that it would have likely made Gable into a laughingstock or been buried simply because it would have been that awful. How a line is spoken and the attitude that it’s given is very important since without the added embellishment or lack thereof the line doesn’t come out right and the actors tend to look like fools for having missed their cue somehow. A line that’s been flubbed is pretty easy to hear sometimes since to the trained or experienced ear it just comes out sounding wrong and in doing so doesn’t mesh with the rest of the movie. There have been many lines that actors have flubbed in the past and yet they’ve been lost to a lot of viewers since the movie has continued to capture their attention in a manner that makes it possible to ignore the mistakes and just keep going. But if anyone remembers them, then it becomes obvious that some actors do manage to deliver their lines in a manner that just doesn’t feel natural.

That’s why some of the greatest quotes are so memorable because the actors put everything into it and deliver their lines in such a convincing manner that people can believe the emotion that’s being allowed to push the moment. When Leonidas makes his proclamation, when Vader makes his revelation, you can FEEL that emotion that’s boiling at the surface as it suddenly explodes. That’s the difference between good lines and great ones, there’s a ton of feeling behind the best of them.