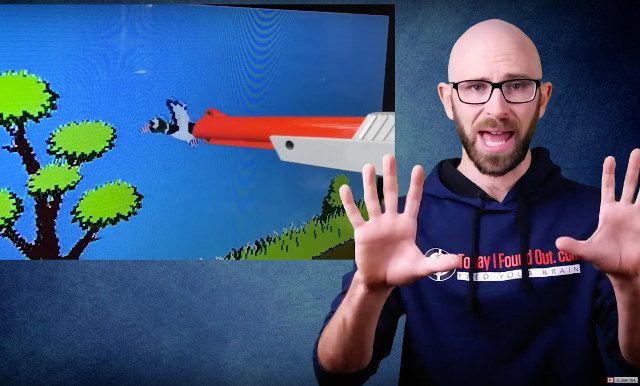 For all you folks out there who grew up in the Atari and NES generation, this video will be a joy to watch.Â  Unfortunately that sound it makes when you shoot a duck in Duck Hunt is now going to be in your head for the rest of the day.Â  Either that or the image of that laughing dog is going to haunt your dreams.Â  Anyway, while you were playing Duck Hunt, I highly doubt that you ever thought about the technology behind the gun but maybe you stopped to wonder, “how does it do this?”

It turns out that it’s a very basic technology.Â  However it’s a technology that without, we wouldn’t have all of the amazing effects we have in video games today.Â  Think about how advanced we are with systems like Wii, which are already becoming outdated.Â  We’re practically at a point where controllers aren’t needs and body movement is synonymous with video game play.

But just in case you ever wondered exactly how that gun worked in Duck Hunt, this is a pretty cool video to watch.Â  P.S. I told you Duck Hunt would be in your head all day!Â  Actually it’s in mine and I’m hoping it’s not just me.