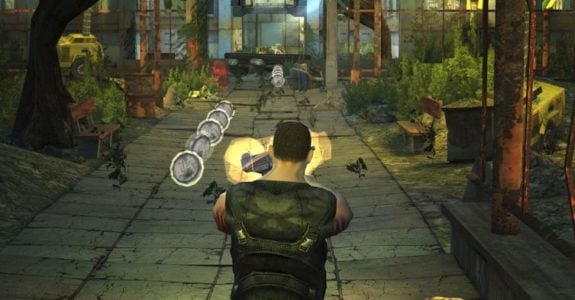 Who’s ever heard that their video games are too violent, or that the content is troubling, or problematic? If you’re nodding or saying ‘yep’, or giving any kind of affirmative, then you’ve likely heard more than one person utter those words or something like them. The reason for this is that those that see the violence but either don’t understand the content or how what we watch and hear really affect us. Here’s an example, a lot of us watched Tom and Jerry when we were kids, but how many of us ever tried to run into a wall thinking we’d fold up like an accordion or be able to just shake it off without any ill effects? Anyone? The violence that’s seen and experienced on TV, including video games, simply doesn’t correlate to real-life violence, at least not on a scale that could be called an epidemic or come even close to justifying the vendettas that some folks have enacted against video games over the years. Video games don’t cause the violence even if they glorify it with one title after another, as there’s no subliminal messaging in the games that say ‘go out and cause anarchy’. Some might want to think that this is the case, that real-world violence is caused by the onset of video games, but there’s a huge fallacy in that line of thinking: human beings don’t need video games to be violent.

Human history easily proves that video games didn’t invent or even increase the level of violence that people do to each other. What’s amazing is that anyone would think that they do in this day and age. Think back to the early days of humanity, violence took place without the benefit of anything even remotely technological, other than the weaponry of the time. If one reads the Holy Bible they’ll see that it was jealousy that caused Cain to slay Abel, it wasn’t because God gave him a glimpse of the future and showed it to him in a video game. Human beings have been killing each other for millennia and at this point, it’s enough to raise an eyebrow and think that someone’s off their meds if they think that a CGI creation can somehow convince the player that what they’re doing is so great that they need to run out and emulate it. Can anyone guess why a hardcore gamer would never in a thousand years do something that they see in a game? If you answered that it’s because they’re too busy playing the game you’d be right. As for anyone else, even thinking of using video games as an excuse is a well-known dodge that some folks might want to think is a valid defense for any wrongdoing since it takes the responsibility out of their hands and makes a scapegoat out of the gaming industry, which is obviously affluent enough to pay out if they did, in fact, have something to do with it. But unfortunately for those that are brainless enough to try it,

Real-life violence is often caused by a variety of factors, but video games aren’t on the list. If anyone is truly paying attention, violent actions that are actually carried out are often committed by those that have had severe trauma of some type in their life and either doesn’t have the necessary inhibitions that would ordinarily stop a person from committing said acts or are mentally disturbed in some way. Of course, both conditions could be happening at the same time as those that have a difficult to nightmarish upbringing are quite often susceptible to lacking any real social graces or inhibitions that might keep them from doing something that society says is wrong. Believe it or not, video games can actually relax a person, and winning a video game, or being rewarded for doing something right or passing a level or anything that is seen as a positive move forward, can actually improve a person’s mood and make them less susceptible to violent mood swings that might lead to violent actions. Of course, frustration with a video game can lead to outbursts and childish tantrums, but that’s hardly a warning sign that someone is about to be violent. This argument is one that’s been ongoing for decades now and has unfortunately been kept alive by those that don’t even play video games but see the violent images and make vague assumptions that they claim are backed up by research that, realistically, is quite flawed and has been proven to be so throughout the years. When a person decides to try ripping another human being’s heart from their chest like Kano in Mortal Kombat, or attempts to recreate Grand Theft Auto in their neighborhood, then it’s time to worry. But until then, video games are a source of pleasure, not a how-to guide when it comes to mayhem.