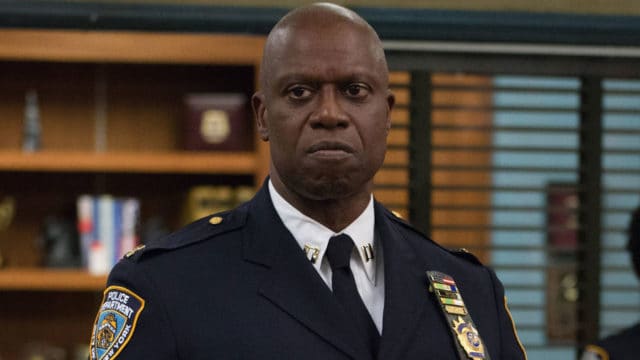 Andre Braugher is a different type of man when it comes to comedy. His deadpan manner isn’t exactly something that you would figure might work for a show like Brooklyn Nine-Nine, especially since it’s supposed to be uproariously funny. But guess what? He’s the perfect foil for a guy like Andy Samberg who’s so off the wall funny that he kind of needs someone else to ground him out. Braugher is that guy that doesn’t smile, unless it’s forced, doesn’t react to much of anything other than to grimace and pull a face that’s somehow even more serious than his usual look, and appears to be having no fun at all no matter what. And yet you can’t help but laugh at him as he his demeanor somehow lightens up the mood. As Captain Holt he’s funny in an opposite manner that’s somehow confusing but also so great that you can’t help but watch.

Having seen Braugher on other shows and in films where his serious demeanor is entirely appropriate for the setting it’s hard to imagine that this same type of character could be used for anything funny. But the fact remains that he’s a laugh riot since among the entire cast he’s one of the only ones that remains completely deadpan for the entire show. Seriously, watching him crack a smile is an almost scary experience in this role. He’s smiled on shows like Law and Order: SVU, and in films such as The Mist, but if you can believe it his characters are much looser in those instances than Holt could ever be.

Holt is the type of character that is both rigid and unmovable, bound by his duty and his job while at the same time capable of levity in a manner that isn’t obvious but is still somehow always present. Â The manner in which he interacts with the rest of the cast is stiff and unyielding but that allows the rest of them to play off of it so perfectly that Holt doesn’t need to change. Just watching the clips below and knowing at least a little something about how the actor goes into a role is enough to consider that when it comes to comedy he’s not the traditional goofy guy that will do whatever it takes to get a laugh, and thankfully he doesn’t need to.

Braugher can go completely serious and say something so off the wall that he’ll have you looking at him two, possibly three times just to ascertain whether or not he’s joking or if he’s being completely serious. The guy has a nice smile but you don’t get to see it that much on this show. To be quite honest that’s a good thing since otherwise the character of Holt would kind of be ruined. He’s better as the hardcase that’s there to either make people’s lives miserable or get the job done, or both.

As Holt he gets to be funny without having to be campy or so over the top you can’t stand him, and that’s what makes Braugher’s role so great.