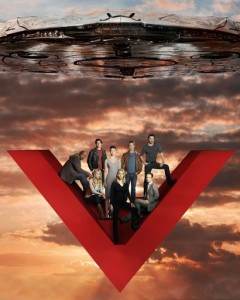 If you’re not pumped for V’s return next Tuesday, January 4th, at 9pm EST on ABC – here’s the cast of V to help you along. Before I turn the mic over to them, let me tell you: I’ve seen the first three episodes of V’s second season and they totally rock. V has been given a tuneup that addresses the show’s – few, in my opinion – short comings. I’ll be hitting you with an enthused advanced preview of all three episodes next Monday, in the mean-time here are the stars of V to help get you excited for the Season 2 Premiere “Red Rain”. Click here for preview clips from “Red Rain”.

V – “Red Rain” – “V” will make its highly-anticipated Season Two premiere, TUESDAY, JANUARY 4 (9:00-10:00 p.m., ET) on ABC. The Season Two opener, “Red Rain,” continues the action from last season’s finale when Anna unleashed Red Sky on the planet. With the world on the brink of war and chaos all around, is there anyone who can stand up to Anna? Meanwhile, Ryan has been kept in isolation on the mothership, away from his hybrid baby so that Anna can experiment on her; Chad, seeking redemption for being used by Anna, now wants to fight with the Fifth Column; and Erica goes on a journey to find a scientist who can give her the answers to what Red Sky is, and where she learns the horrifying secret of what the V’s are doing on our planet.