AMCTV is known for ‘˜going there’in terms of kinetic, challenging drama that you just can’t take your eyes off — with The Walking Dead, AMC is taking intense human storytelling to an even darker dimension. If you weren’t made a believer with the last bit of video goodness AMC released, The Walking Dead trailer, I double zombie dare you to take in this marvelous bit of storytelling. If you are unfamiliar with Robert Kirkman’s comic series of the same name, I suggest you focus on the number of times you hear the words ‘character’and ‘story.’Yes, anyone can pull zombie hokum out of their butt, what Kirkman started in the comic, and Frank Darabont is channeling to the screen, is nothing short of a dark fairy tale into the shadow filled groves of the human psyche. The Walking Dead would be scary, without zombies. Don’t worry though, under all that bleakness and rotting flesh is a pinpoint of light.

The Walking Dead fans attending NY Comic Con will be treated to an exclusive premiere of the series at the event. Here are details from AMC:

During New York Comic Con, AMC will premiere the first full scenes from the network’s highly anticipated series, ‘The Walking Dead.’In addition to the exclusive preview, the stars and producers of the drama, based on the comic book written by Robert Kirkman, will be present for a panel scheduled for Sunday, October 10 at 2:15pm in the IGN Theater. The event will include series stars Andrew Lincoln (Love Actually), Jon Bernthal (‘The Pacific’), Sarah Wayne Callies (‘Prison Break’), Laurie Holden (The Mist), and Steven Yeun (‘The Big Bang Theory’). Joining the cast are writer, director, executive producer and three-time Academy Award nominee Frank Darabont (The Shawshank Redemption, The Green Mile) and executive producers, Robert Kirkman and Gale Anne Hurd (The Terminator, Aliens, Armageddon). ‘The Walking Dead’will premiere on Halloween at 10pm EST on AMC.

During the 90-minute event, moderator Eric Moro of IGN.com will lead panelists in a discussion about their experience shooting the ‘The Walking Dead,’and the process of bringing Kirkman’s comic book to life on the small screen, among other topics. The panel will be followed by a Q&A session with attendees.

About ‘The Walking Dead’

‘The Walking Dead’tells the story of the weeks and months that follow after a zombie apocalypse. County Sheriff Rick Grimes (Lincoln) travels with his family and a small group of survivors, constantly in search of a safe and secure home. But the constant pressure of fighting off death on a daily basis takes a heavy toll, sending many to the lowest depths of human cruelty. As Rick struggles to keep his family alive, he will discover that the overwhelming fear of the survivors can be far more dangerous than the mindless walkers roaming the earth. 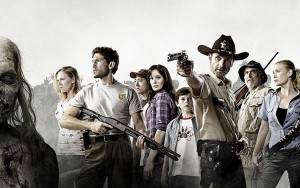