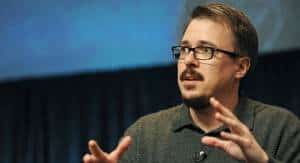 Is your head still spinning after the shocking conclusion to season 3 of Breaking Bad? Are you wondering if Jesse really did what you think he did? Once you’ve read my review of the episode, check out what creator/showrunner Vince Gilligan had to say about that final scene and writing the show in general in an interview with The AV Club.

Gilligan addressing what really happened in the final scene:

To me, for what it’s worth, it’s not actually meant to be ambiguous. It’s meant to be, ‘Oh my god, Jesse shot poor Gale.’But I’m realizing now that when people see the camera come dollying around so it’s looking down the barrel of the gun, some are reading that as maybe he’s changing his point of aim. But that’s not what we intended. Apparently it’s not as clear as I thought it would be. [Laughs.]

Absolutely, it definitely is [a cliffhanger]. I mean, you’re right that there was a certain sense of closure at the end of season two because an answer was given to a question that had been posed during the first moments of that season, and that had been hanging over the whole season. This year has a different feeling. There’s been no bookends or circular storytelling with this particular season, and you’re right, no matter how you slice it this is definitely a cliffhanger. ‘Jesus, what the hell comes next?’I think more than any other reason I could give, the best reason for why we did it this way is that we did it a different way last season. We figured it was best to try something new.

The rest of the interview can be read here.