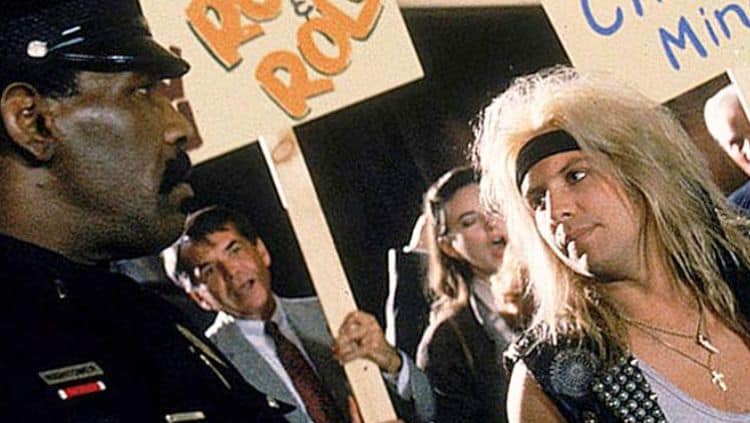 It definitely looks as though a lot of effort goes into making Vince Neil a standout for his Police Academy cameo only to have the scene cut and left behind, but leading up to the appearance everyone appears to be in good spirits. It does tend to help that at this point in his career Vince was on a high note in his career as Dr. Feelgood would come out too long after and since Police Academy 6 flopped, it’s likely that not being seen in the movie was a big up for Vince’s career. As Kevin Burwick of MovieWeb puts it, Peter Bonerz, the director the movie, had a few good things to say about Vince, especially when it came to his wardrobe and his reading for the part, even if he ultimately didn’t think the footage was needed. In a way that might have felt like a backhanded move to make, but given the fact that the movie didn’t perform well at all the only return that Vince could have possibly given that might have been proper would have been a hearty ‘thank you’ for dropping his part. True, it might have been sarcastic to the extreme, but it would have been one of the best possible reactions.

Even as Vince’s career was on an upswing, the Police Academy reputation was swiftly taking a dive that had been happening for a while. It’s kind of hard to say, being a fan of a lot of the actors in the movie, but Police Academy was never quite the same once the sequels started. Everyone has their opinion considering just which movie is the best, but despite what critics or fans might say, the entire idea started to run itself into the ground a while back and eventually just ran out of gas at one point. A big hope is that the idea won’t ever be brought back, even if reboots and remakes are the big thing these days. Police Academy was a movie that at the time was immensely popular and utilized a wide array of talented individuals that, at that time, were given a great deal of freedom to be insanely funny and go wild in a movie that was known for its hilarity. It’s likely that the same type of movies couldn’t be made in this day and age for the same reasons that many others couldn’t, but even if was possible it’s just as likely that they wouldn’t be nearly as funny since getting the original cast back would be impossible, not just because a few of them have passed away, but because a few individuals have no interest in taking up the classic characters yet again.

Vince’s cameo was pretty funny just looking at it since it featured Hightower doing something that is, obviously, pure Hightower. Bubba Smith was an integral part of the idea from the moment of his arrival since he was just massive and because he was one of the most influential people in the cast. The fact that he was also one of the most soft-spoken was often noted since it wasn’t fully expected, but it played well with the rest of the cast since Zed, Tackleberry, and several others were often loud or talkative enough that it made up for anything that Hightower didn’t get to say. Every fan of Police Academy had their favorite cast members, but Hightower was definitely on a great many lists since he wasn’t so over the top that people either liked him or didn’t, but he also wasn’t easy to forget given his size and his part in the movie. It’s kind of saddening really that the Police Academy movies started going downhill in such a way. It’s just further proof unfortunately that some folks don’t know when to say enough is enough when it comes to movie sequels. Too many trips to the well, as the saying goes, tends to spoil a lot of things since it starts to rely on ideas that are substandard, not nearly as developed, and need a lot more help that is often in short supply. Police Academy is just one franchise that started its decline early on, while others in the current day are still profitable but are beginning to gain notice for the fact that they’ve run a course that made sense and are now starting to force viewers to suspend belief on a regular basis. Once that happens it’s pretty easy to see that the end is on its way.

Police Academy was great in its own time, but after a while it simply couldn’t sustain the same story that had made it so great in the first place. Even the characters, great as they were, couldn’t help a struggling idea any longer. So it’s probably best for Vince that he wasn’t associated with Police Academy 6 when it came out.