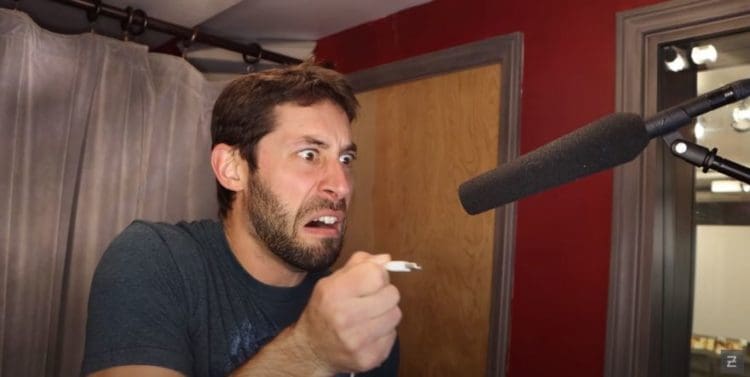 Does anyone still think that voice acting is that simple? Apparently, during anime voice acting, it’s normal to act out actions that don’t usually require a lot of sound, but if anyone is surprised then they’ll need to actually watch a bit of anime in order to see that pretty much everything comes with some sort of sound, even if in other cultures it would be entirely silent. That’s an oddity, isn’t it? Voice acting isn’t exactly easy to start with, but trying to fill the empty spaces with appropriate noises would be kind of difficult since one has to really think about how to vocalize such things. Simply being a voice actor would be kind of difficult for some people since trying to get the right voice just the way that it needs to be would be more than a little difficult for some people depending on what kind of voice was needed. But with anime, it feels as though there are a lot of moments when being vocal is still necessary even when a lot of people might feel that silence is a little more appropriate. This goes beyond voice acting really since it indicates that there’s an absolute need to convey the feeling and emotion behind something that silence might be better suited for.

It doesn’t feel like a universal idea thankfully since there are plenty of moments when utter silence is absolute and kind of needs to be recognized if only to make sense within the story and thereby give the anime a bit more feeling than making noises might. But the idea of simply voice acting is put on display here since the whole act tends to be something that needs to be perfected in a manner that is a lot more intensive than a lot of people might think. It’s not just coming up with a new voice or sound that people might find entertaining, it’s coming up with the RIGHT voice or sound that will work for the moment or situation that’s being presented on screen. If anyone is thinking that a voice actor just sits down or stands reading a script and has everything down at that moment then they’re fooling themselves since being a voice actor is a little more involved than that. There is a need to know just what you’ll be doing and testing out a dozen different voices or more in order to get the right one that will work for the anime that’s being portrayed. Plus, has anyone ever noticed that anime voice actors have to be insanely dramatic at times? Almost everything appears to have as much emotion and expression packed into it as possible.

While it might sound funny to think that voice actors have to operate with just as much emotion as live actors, the reality is that in order to get the overall feel of the characters and the situation down that the actors do need to put a lot of themselves into the part. While some can come up with the voice and the emotions without really getting into it there are a lot of actors that choose to really get into the moment since intense emotions are kind of difficult to create without expressing oneself in some manner. What really feels difficult is nailing every last bit of the script that the director might be calling for, and doing it in a way that is kind of specific and needs to be vocalized in a manner that will be conducive to the anime. Let’s just say that voice acting isn’t something that a person just sits down to do since it does take a bit of practice and a lot of work to really get into it, especially when one has to learn how to modulate their voice in a number of different ways to really hit the notes and sounds that a director might want. Trying to do this in the privacy of your own home is tough enough, but it’s likely how a lot of people that go into this business get their start since that’s kind of what it takes, just sitting down to experiment with your voice and see what you can do without exhausting or otherwise damaging your vocal cords. Some voice actors get by with just using their actual voice since it might be that it fits the needs of the role that they’ve been cast into. Still, just thinking about how many hours it might take to find the necessary sounds that are needed and to have them in mind is kind of tough to fathom.

But it is impressive, that much is for certain, since calling upon that many sounds at any given moment when a director asks for them would be a challenge for most people.

Whatever Happened to Terry Farrell?