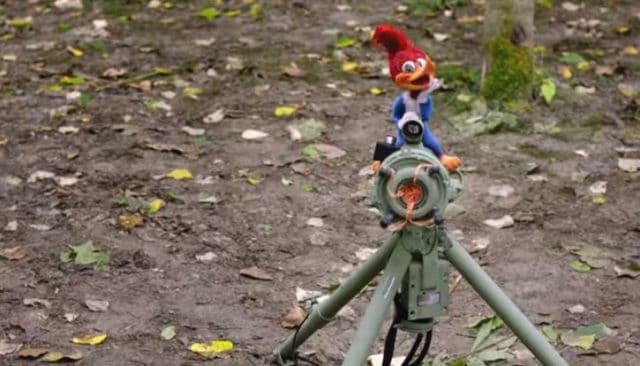 Don’t bother looking it up online unless you want your own copy, there is really a live action Woody the Woodpecker film coming out in 2018. Anyone remember this little guy? He was in many ways just as rascally as any other toon but had the distinct advantage of that big yellow beak. To be honest I don’t remember him being so mean but it’s been a while since I really watched the cartoon so maybe it’s possible that he was kind of a jerk and I don’t recall. In this movie it seems like he’s poised to be a bit of a nuisance but with a reason at the very least. The woodpecker definitely has an attitude and he’s going to use it to the best of his ability.

This film seems like it might be another one that’s poised at instructing people on just what it means to intrude upon an animal’s habitat and what kind of consequences could come, but really it might be more of a chance to revive an old classic at the same time. Woody Woodpecker didn’t garner as much popularity as other toons but he stuck in there for quite a while and even made a small resurgence some time ago as I recall. The cartoon was usually recognized for the woodpecker’s very distinctive laugh and his ability to use his beak to break down virtually anything that stood in his path. In fact there were only a few things that could really impeded Woody when you really think about it, and one of those things was his own careless attitude that tended to get him into trouble from time to time.

This film seems like it’s been adapted more for adolescents and adults than young children though and might be a hard PG if anything. It’s definitely not looking as innocent as the cartoon used to be, roughly speaking, but it is still a live action cartoon regardless. Woody the Woodpecker as a CG character looks a little creepy and might come off that way to some people which is bound to be expected. In regards to other toons he’s never really been the type to be able to relate to anyone or even be a crowd pleaser. Woody was just kind of there for people to laugh at an enjoy while he was around. Like I said was kind of a jerk sometimes and didn’t take a lot of things seriously. That could be why they decided to ramp up his attitude even more for this movie.

At one point in the trailer though it looks like he’s starting to stick up for one of the humans so it could be that the movie will show Woody and the humans attempting to get along eventually once they both realize that neither of them is bound to move on. Coming to an understanding seems like it would be the goal of the movie though I still get the feeling that Woody wouldn’t so much change as he would accept his new neighbors.