Home
TV News
Wait, Who Wants to Be a Millionaire is Still On? 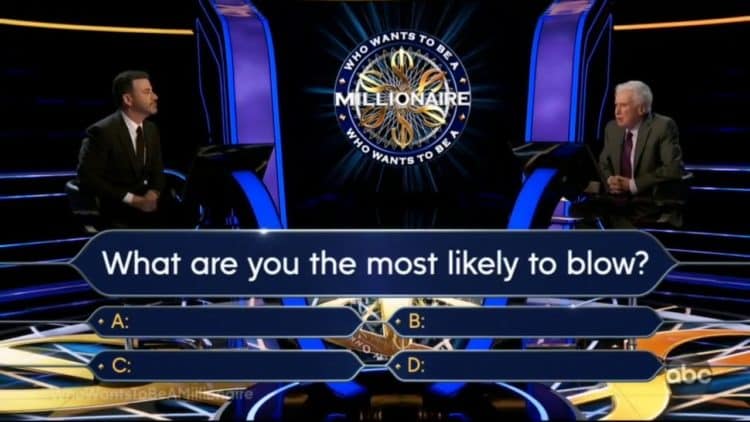 There’s just something about game shows that always pulls people in. Whether you like to participate from your living room or just like to watch the contestants do their thing, it’s always fun to see people compete. Even with that said, however, there have always been certain shows that stand out more than others and Who Wants to Be a Millionaire is one of them. When the show debuted in the United States in 1999, it quickly became one of the most popular game shows on TV. Throughout its run, Who Wants to Be a Millionaire won seven Daytime Emmy Awards. It was also included in TV Guide’s list of the greatest game shows of all-time.

The name alone make it easy to see why the show has been such a big hit. After all, who doesn’t want to be a millionaire? But like everything else, the show’s buzz eventually died down over the years. Unless you’re a diehard fan, you may not have even known that it still comes on. Not only is Who Wants to Be a Millionaire still on TV, but it’s hoping to catch a second wind among viewers. Keep reading to learn more about Who Wants to Be a Millionaire.

The History Of Who Wants To Be A Millionaire

Who Wants to Be a Millionaire is based on a British game show of the same name which debuted in 1998. The American version of the series operates in a similar fashion to the original. During each episode, contestants compete in a quiz like game where the objecting is to win the grand prize of $1 million. When the series began airing in the United States, it became the first network game show in American to offer a million dollar prize.

The quiz consists of 15 (sometimes 14 depending on the season) questions each worth a specific dollar amount. During most seasons of the show. One of the things that makes the show so intense is the fact that if a contestant gets just one answer wrong, they lose all of the money they’ve won so far and go home with nothing. On the other hand, however, contestants can choose to opt out of the game and keep what they’ve won so far if they come across a question they feel they can’t answer. Of course, since most people are hoping to leave the game with the big bucks, they are often willing to risk it all to get closer to the $1 million prize.

The show also features several ‘lifelines’ contestants can use to help them find the answer to a question. Over the years, the list of lifelines has included options such as ‘phone a friend’ and ‘ask the audience’. Each lifeline can only be used once per game (unless otherwise stated), but contestants have the option to use more than one lifeline on a single question. Throughout the show’s history in the United States, only 12 people have earned the million dollar prize.

As mentioned earlier, the fact that Who Wants to Be a Millionaire still comes on is a shock to some people. With that being said, the show has undergone some changes over the years. After its original run on ABC from 1999 to to 2002, the show ran in syndication from 2002 to 2019. Who Wants to Be a Millionaire is now officially back on ABC. The show is now hosted by Jimmy Kimmel and the contestants will probably be some pretty familiar faces. The current iteration of the show features celebrity contestants. Since all of these new players clearly don’t need a million dollars, all of their earnings will be donated to charity. Some of the celebrities who have been on the show include Andy Cohen, Dr. Phil, and Anderson Cooper.

Due to the pandemic, the first nine episodes were filmed without a live audience. As a result, the ‘ask the audience’ lifeline was removed and replaced with ‘ask the host’. After a successful first season, the celebrity reboot was renewed for a second season. Starting in season two contestants also included first responders.

If you’re looking for something fun and lighthearted to watch during the pandemic, Who Wants to Be a Millionaire could be just what you need. Not only is watching the show entertaining by itself, but it’s also fun to try to guess along with the contestants. Additionally, the show now has a feel good component since the celebrity earnings will be going towards a good cause.