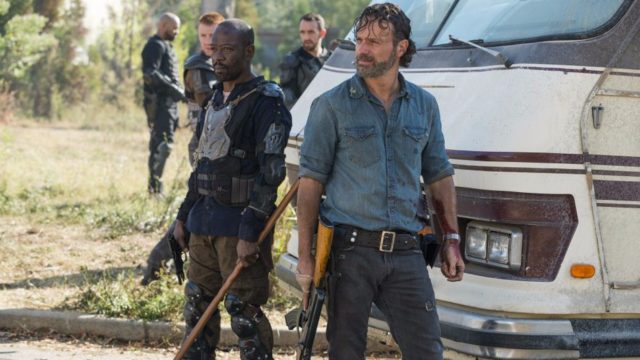 Season 7 of The Walking Dead literally ended a day ago and Scott Gimple’s already touting season 8.Â  We still haven’t even gotten a full review of season 7 yet.Â  By many accounts people considered the finale to be “what they expected” and definitely “solid” but not nearly as shocking or mentally long lasting as the premiere of season 7 which basically shocked the entire universe.Â Â  The biggest criticism for season 7 was that it was “meandering.”Â  Too much waiting around and speculation and not enough action.Â  Apparently there will be a stop to that.

Season 8 of AMC’s juggernaut will draw inspiration from the “All Out War” storyline in Robert Kirkman’s comics, in which Rick and his allies take on Negan’s men in an escalating series of battles to try and dethrone the despotic leader once and for all.Â  “It’s going to be bigger, more intense,” showrunner Scott Gimple said of Season 8 on Talking Dead following the finale. “The first four episodes will melt people’s minds and break their televisions.”

“It’s going to be different. They aren’t going to meet in Alexandria every weekend and do that. There are twists and turns to it, definitely some small-scale things and some large-scale things and a whole different momentum to the story,” Gimple told TVLine. Now that [the various factions] are in public conflict and everything is on the table as far as everybody knows who everybody is to each other and what’s going on, the narrative changes a lot. It’s going to become a bit more kinetic and fast-moving, because that’s where the story is going. The content is definitely going to be determining the form.”

I’m not sure how I feel about Scott Gimple right now.Â  First the guy talked a lot of trash at PaleyFest saying the show is going to last over 20 seasons.Â  Then he “regretfully” informs fans that the show will end in 2030.Â  I mean I guess you have a right to have an ego if you’re one of the heads of one of the most successful series on television but if it were me, I’d constantly strive to be better than rattle peoples brains around like this.Â  Frankly I find it a little obtuse.Â  Just get the show where it needs to be without all this fluff attached.Â  No excuses, get it done.