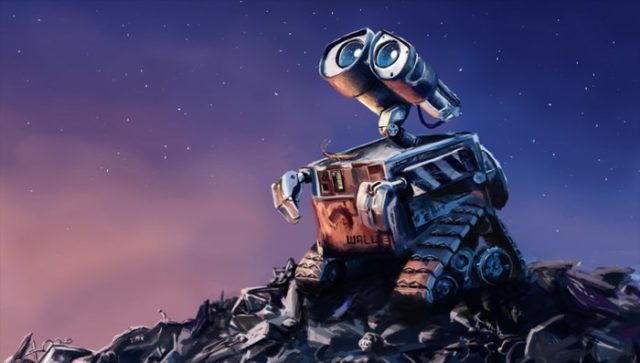 We loved Wall-E when we first met him. He was all alone, a small and adorable robot trash compacter. His work routine wasn’t difficult. He just gathered trash into cubes and stacked them into orderly stacks. But, he had human qualities that endeared him to us. He was curious, and he had created a home for himself filled with human debris. The great thing about his collection of junk was that it taught him about humans, and we saw our humanity in the films he watched as he learned about human emotions. Wide-eyed little Wall-E tugged at heartstrings young and old.

But one day, Wall-E had an unexpected visitor, in the form of EVE, a pristine white robot that is obviously far out of Wall-E’s league. But together, they have an amazing adventure as EVE becomes Wall-E’s ticket to the outer space location that the humans call home. That is where the love story between the last robot on Earth and his jazzy new friend begins, because they both have brought something truly special along with them.

Andrew Stanton directed the Pixar film. It was released in 2008, and that’s when Pixar described the film as a parable for environmentalists. But Stanton didn’t have an ecological or political message hidden within the plot. He simply wanted to tell the love story. It’s what happens to Wall-E and EVE when they end up at the human’s place in outer space that tells the complete story. Humans are living in an environment completely devoid of the natural beauty of Earth. They have been consuming food and entertainment to the exclusion of all other pursuits. They have become blobs of flesh incapable of functioning on their own, thinking for themselves, or participating in what we view as normal human life. Their lives have become completely regimented, and they have forgotten about Earth.

Wall-E is a cautionary tale which didn’t set out to become one. The futuristic story tells the tale of our own Earth, today, though it is set somewhere far ahead in a futuristic time. We struggle with similar themes now. We wonder what will happen to society when unchecked consumerism leaves us with plenty of things- but little of human substance. We wonder if private industry’s need for profit is affecting the public’s ability to purchase well-made products which are useful and life-enhancing. We worry that our consumption of resources is not worth the huge piles of trash we are creating. We are afraid that the world’s governments are not considering our future, but setting us up for dire circumstances over which we have no control. We agonize over climate change. We fear nuclear attack…again. It has been so for generations.

For now, Wall-E gives us a masterpiece film, with characters which cause us to chuckle, or smile, wrapped up in a vision of future dystopia. It is a truly amazing film, with so much to like. We cannot help laughing over Wall-E’s curiosity and ingenuity. We cannot help falling for his assertive, yet gentle guardianship of Earth’s trash. Beyond that, we are compelled to consider Wall-E’s Earth and what he and EVE, and the rest of the cast of characters ultimately do at the tale’s conclusion. It’s a thoughtful and hopeful story about caring for the environment one inhabits; and ultimately each other. That’s what makes it great, and that’s why it’s a great film to see again soon.